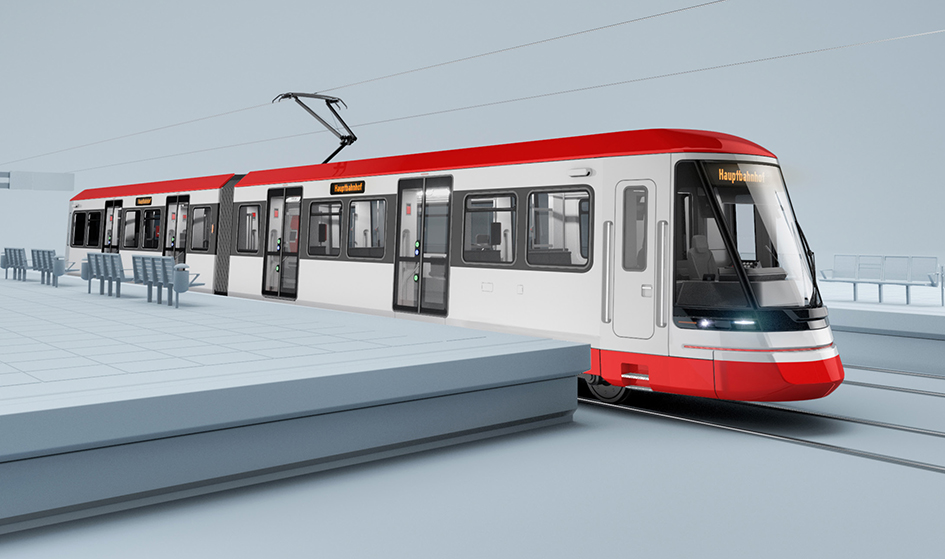 The Hfx has subtle differences from the Bombardier-built HF6, including an enclosed coupler housing – the Hfx is seen here in Duisburg livery. Image courtesy of DVG

Düsseldorf tramway operator Rheinbahn has awarded a EUR340m contract for 91 high-floor 178-passenger LRVs to Siemens as part of a joint order with Duisburg (which will take 18 LRVs for EUR55m). The contract includes 24 years of spare parts supply.

The new cars, designated HFx, will arrive in 2025-27; there is an option to order 42 more. The tender, to replace the aluminium-bodied Duewag Stadtbahn-B dating from 1981-85, was originally intended to be a joint order with the city of Köln (Cologne), with Rheinbahn ordering first, in 2015, and choosing 59 of the HF6 Flexity Swift type manufactured by Bombardier for EUR167m.

In recent years Rheinbahn has been buying Siemens trams, and this was its first order with Bombardier (which has a strong presence in Köln). However there has been a considerable delay in getting the first deliveries into service, including what the local press described as ‘new cars too big to fit subways’, which was in fact the positioning of some bogie equipment outside the kinematic envelope for certain sections of tram subway. Software problems have taken time to resolve, and more recently welding faults have been discovered.

Deliveries have been stopped and because 16 of the HF6 were to be used to improve frequencies in October, this has had to be postponed. An independent consultant has been called in, so it is not yet clear when the first paying passengers will be carried.

Recent orders for Siemens from other cities have all been of the Avenio low-floor design, so the HFx will be a new product for the manufacturer. Siemens acquired 60% of Duewag in 1989 and the remaining 40% in 1999 and is therefore associated with the Stadtbahn-B cars to be replaced.