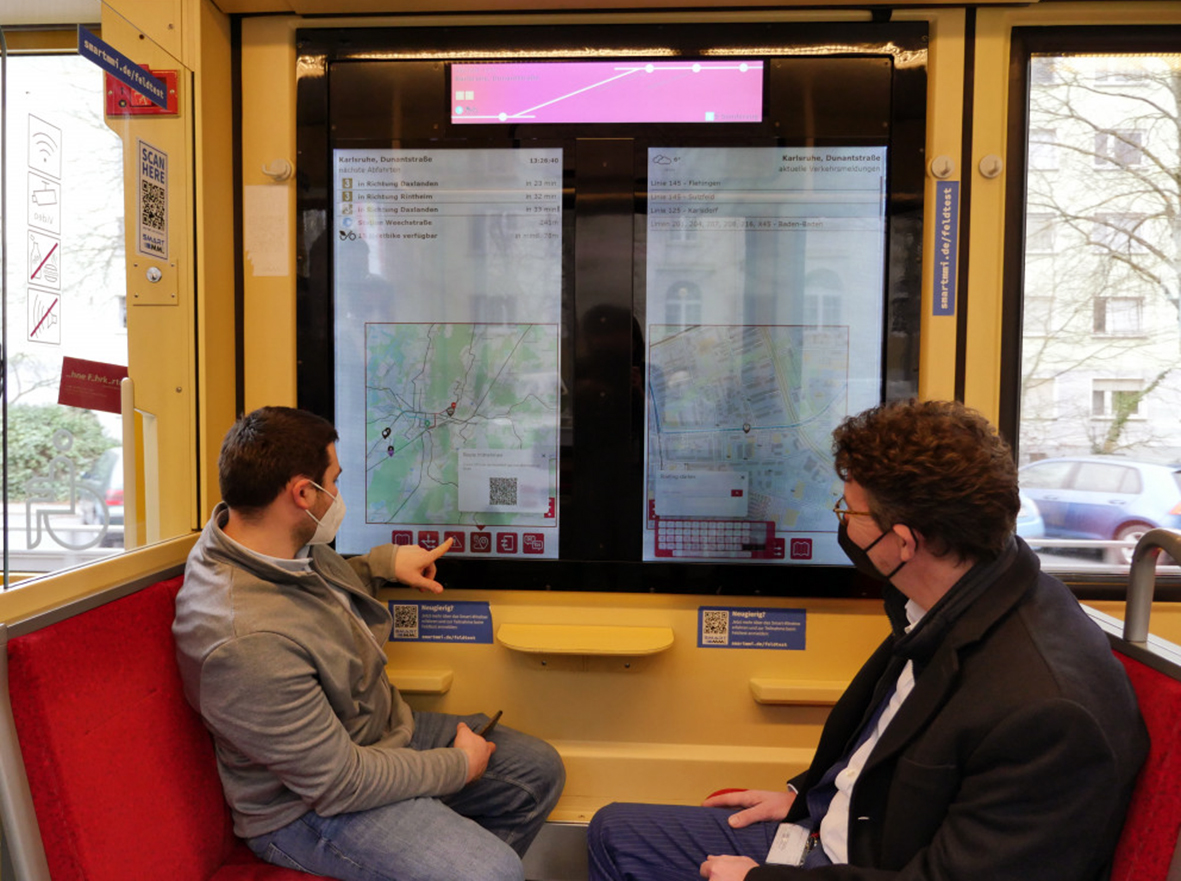 Route planning for groups travelling together is simple using the SmartWindow

Passengers in Karlsruhe can now access timetabling and disruption information… through their window. The team behind the SmartMMI project explains how it works.

One glance is all it takes for passengers to find out about a passing museum, tourist attraction or his or her next connection… all this and more is displayed on the semi-transparent SmartWindow being trialled on a dual-system tram-train operated by Germany’s Albtal-Verkehrs-Gesellschaft (AVG).

For those who wish to take the information with them, a complementary app allows users to interact with the onboard screens and transfer data to their own device. So what sounded like science fiction just a few years ago is now a reality through the SmartMMI (Smart Model- and context-based Mobility Information) research project, led by the Karlsruhe University of Applied Sciences (HKA).

Semi-transparent displays onboard public transport vehicles have been presented as prototypes for passenger information before, but this project is a first in that the project partners were able to develop a visualisation and interaction concept in a user-centred approach and at the same time advance the data-centric services that feed them.

The use of augmented reality is now commonplace. Via smartphone apps, on television or while behind the wheel of a car, many of us are already familiar with this technology. The background to SmartMMI stems therefore from a desire to enhance the travel experience for the millions of people who use public transport services each day.

In order to transform such journeys from a necessity into a more rounded and more useful mobility experience, the project – funded with EUR2.6m from the mFund initiative of the German Federal Ministry of Transport and Digital Infrastructure – focuses on improving the information supplied to passengers along their journey as part of a true ‘door-to door’ mobility chain.

Under the scheme, industrial and research partners have combined a variety of data sources to form a simple to use public transport platform which can then present customised information to the passenger on either SmartWindow displays or phones.

Passengers increasingly demand real-time information about their journeys, staying up to date in the event of a breakdown or changes of plan, or to use their time planning visits to points of interest along their travel routes. 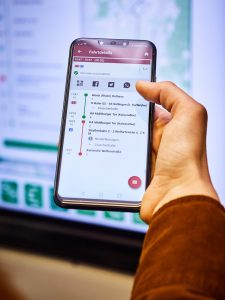 Pairing a smartphone allows passengers to take the information with them when they disembark the vehicle or to view sensitive journey information.

The SmartMMI initiative has brought together project partners who share the common goal of developing new data technologies – from acquisition and integration, to visualisation. Transitioning from concept to reality, the physical element of the project is concentrating on researching and testing context-sensitive provision of mobility data on intelligent semi-transparent display panels. These can be installed not only in public transport vehicles but also at stops, working in harmony with applications on passengers’ own mobile devices.

The core of the project relies not only on new technologies and models for capturing data streams – including specific public transport information based on the latest standards, combined with open and thirdparty data – but on the unifying ‘Big Data’ element that sits behind it. This is semantically enriched to enable intelligent integration. The semantic data structure allows for easy selection of the data which is most relevant to individual passengers’ current situations, and enables the system to prepare tailored information for each user’s needs.

For example, sensitive data is displayed on a user’s device, while general supplementary information is displayed on the multi-panel SmartWindow, using the larger area to give more detail or for sharing with groups of travellers. Discrete colour concepts can be used to establish the connection between a passenger’s personal route and more general information, for example.

On the hardware side, three x86 computers manufactured by MOXA have been installed in the roof of the test vehicle – in this case Siemens-built GT8-100D tram-train 900, delivered to AVG in 2003. These computers function as a local server and as the ‘brain’ of SmartMMI. Each unit performs dedicated tasks, such as communicating with the vehicle’s information system or the provision of locally-stored maps and images, and each controls one of the three displays.

The vehicle provides information about its location on the line and the destination, as well as upcoming stops and more details about them. All other communications are bundled and sent to the cloud; this includes timetable information and route requests, data from operator AVG, and detail on point of interests and the weather.

On the SmartWindow itself, the upper horizontally-mounted screen displays the stop sequence, final terminus and detail of connecting services. The lower two 112cm (44in) touchscreens show dynamic passenger information. In the upper area of these screens, more detailed departure information covers the next stop, an overview of any disruption on the line and time and weather data. While the top screen is the most relevant for standing passengers and those further away, the lower screens offer greater value to people sitting down as users can interact with, select and adjust the information given.

Passengers by the window have access to six different touch interactions. First is the map function, showing the vehicle’s current location and route. There are filters for points of interest and to share locations, and the passenger can start an EFA (electronic timetable) request.

The second icon launches either a static or interactive network map, which gives the option of selecting stops on the line. This can be used, for example, to plan onward connections. The third function prioritises passenger information (already displayed on the right screen), with the option of exploring this in more detail. It is also possible to plan a route directly on the map, which is helpful for passengers who do not know the names of their stop or want to reach certain points of interest. The fifth and sixth icons allows users to pair a smartphone or toggle between German and English language options.

The visualisation and interaction concept for the SmartWindow has been developed in an iterative user-centred process and has been repeatedly tested in user trials, to ensure good usability. In this project, the team has learnt a lot about the passenger’s information need and interaction preferences. 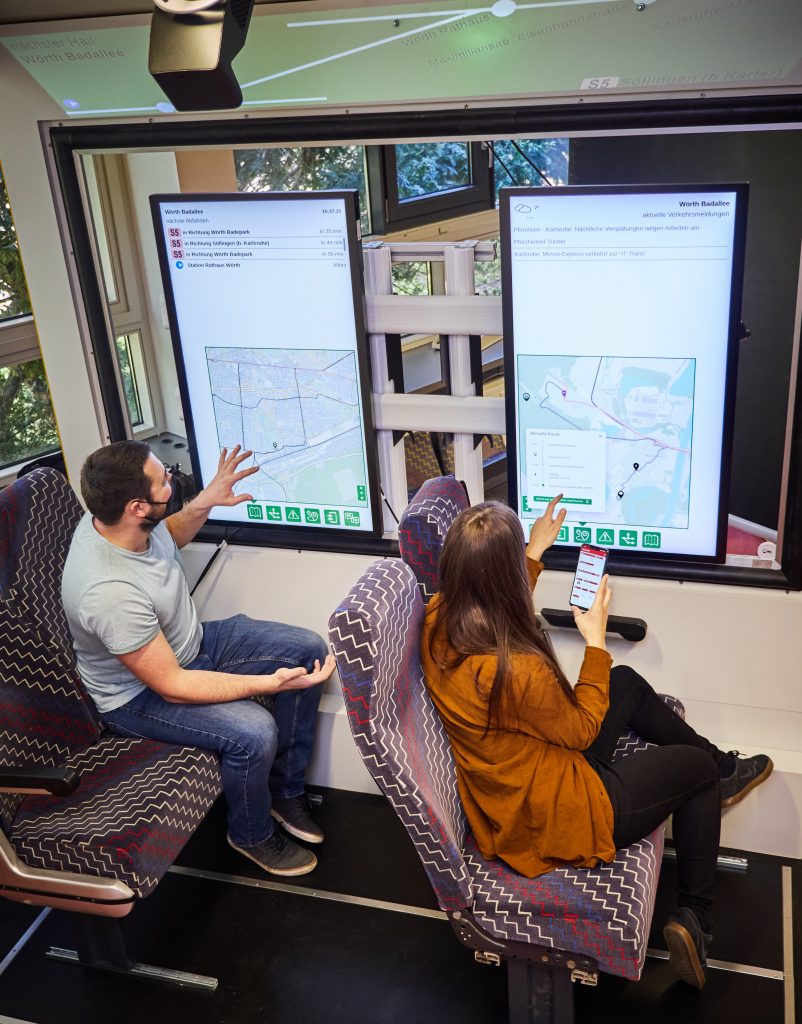 The SmartWindow technology under evaluation in the lab before being applied to an AVG tram-train.

In creating the SmartWindow interface, the basic structure of the transparent display was the first detailed step. A glass pane on which the touchscreen is mounted is ‘bonded’ to the TFT panel; this prevents viewing problems caused by air layers between the two. A so-called ‘light guide’ is mounted on the back, ensuring an even distribution.

Next, the unit was subjected to radiation measurement under laboratory conditions to ensure it did not emit excessive electrostatic or electromagnetic influences. The frame was then transported to the Hübner test rig in Kassel, Germany, one of the few specialist facilities capable of withstanding practical pressure loads from railroad operation, for example when two vehicles pass each other.

In the ongoing field tests which began in September 2021, SmartMMI is being trialled within the confines of restrictions created by the COVID pandemic. In the current phase, passengers can interact with the SmartWindow on a dual-system AVG light rail vehicle and pair it with the accompanying app. The evaluation will take place until the end of 2022, providing valuable insight into the potential and future viability of such interactive systems and how they can be improved.

Participants in user studies have been asked to complete specific tasks, then complete a questionnaire about the usability of different functions and how likely they would be to use them in the future. Concerns over hygiene from touch interaction with a public display were raised, but the multi-touch interaction concept was rated as intuitive and interesting. Study participants enjoy planning their routes via the interactive line network plan and discover points of interests along the route.

The project has sparked a lot of interest among passengers as well as public transportoperators. A key advantage is that the displays offer interactive information in the vehicle using a much larger screen than smartphones, which allows for different and complementary information visualisation. An interactive network plan cannot, for example, be easily displayed on a smartphone screen, but fits on the SmartWindow and allows passengers to explore their route.

The funding for this project has now ended but the project team is looking forward to seeing the evaluation results and then explore future applications of the SmartWindow.

> All images courtesy of the SmartMMI team. Find out more at www.smartmmi.de