The Southampton Tram Project: Over 40 years in the making 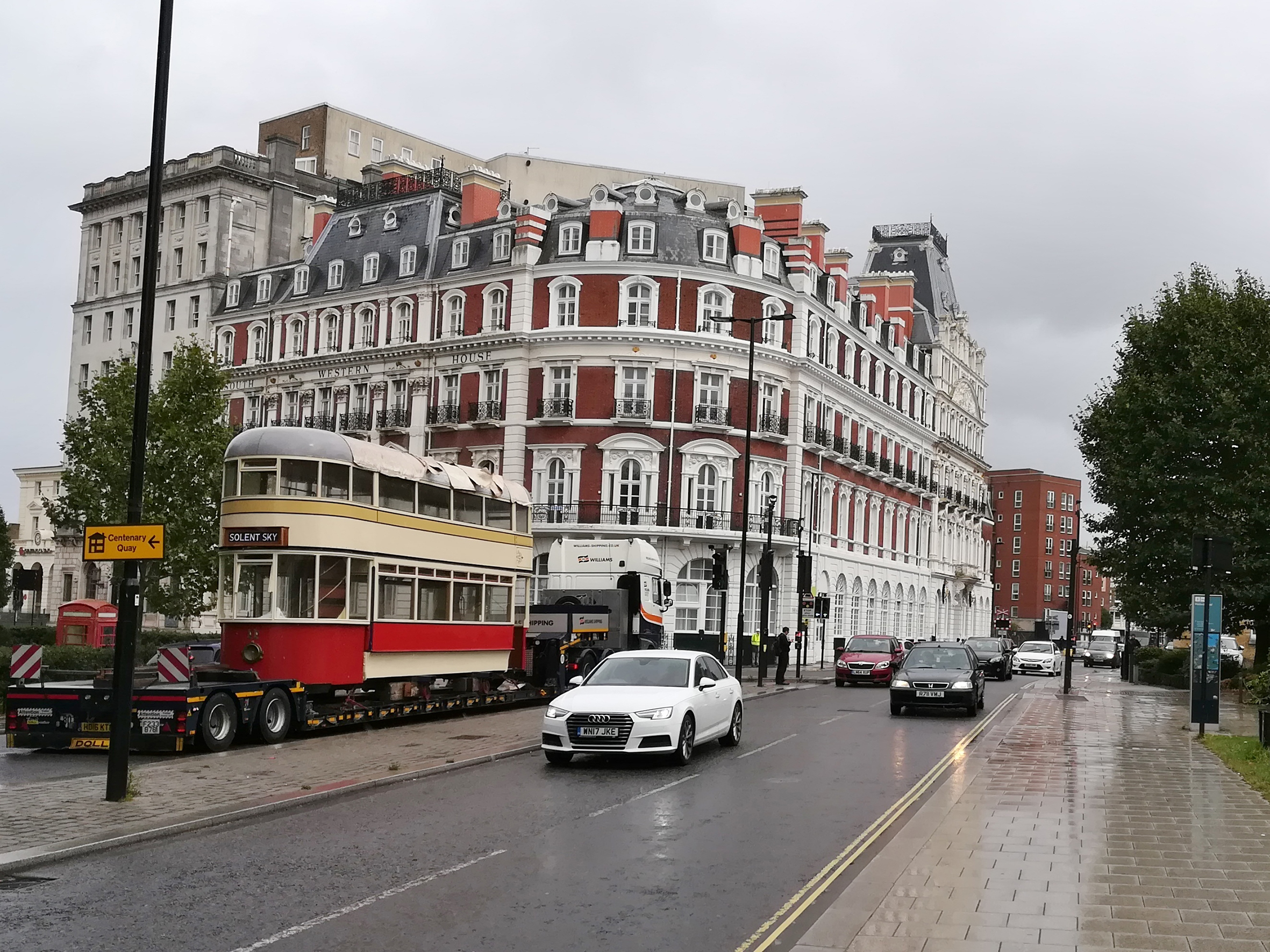 Car 11 looked magnificent as it passed the former Docks tram terminus at the old South Western Hotel on 27 August 2020.

It all started as an offshoot of the UK’s Southampton University Industrial Archaeology Group (IA). Car 57 had been located on behalf of the City Council, which wanted a local tram to put on display, and it was moved into a store in 1975. The council had planned to have the body restored professionally, but budget cuts soon put paid to this. 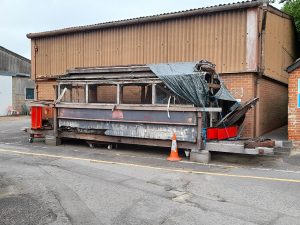 The rather forlorn body of tram 57 at Hampshire Cultural Trust’s Chilcomb site in 2021.

Late in 1976 the new senior museum keeper restarted the project and called on the IA Group to help, so an enthusiastic band of volunteers coalesced in January 1977 to see what could be done. What is now the Southampton Tram Project started as the Tram 57 Project. After a clean-up operation, an open day was held to raise funds and awareness, and our attention was soon drawn to other surviving car bodies.

A further two Southampton bodies were deemed suitable for restoration, in better condition than 57; these were also donated to the council, while 57 was soon put on the back burner. In 1979 the project moved into British Gas premises in Millbrook, where ‘knifeboard’ car 38 was soon joined by dome-roof car 11. Students from Southampton Technical College dismantled and rebuilt car 11 here, with project members supporting them by preparing materials and offering detailed advice as best we could.

When Eastney depot in Portsmouth was redeveloped in 1991, that city’s tram 84 became homeless. Luckily, there was sufficient space in our workshop to accommodate it until it could move to a permanent home at Basingstoke’s Milestones Museum in 2000.

In 1997 an enthusiast in Essex purchased three trams from Lisboa, but the first to be transported was not the one he was hoping for. Knowing that we were interested in acquiring a Portuguese tram, he asked if we would buy the one ‘on its way’ so he would have funds for the next. Lisboa 715 soon joined our collection. 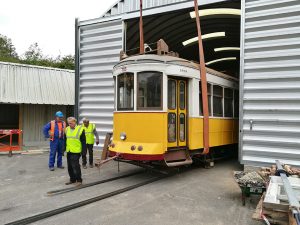 Lisboa 715 put up a fight on the soft surface, and had to be pushed and dragged into the shed; Museum Director Alan Jones (centre) is actively assisting.

Sadly, we had to vacate the Millbrook site in 2003. With no available premises, everything had to go into storage. As the council still owned the trams, these were moved into the museum’s Collections Centre and to a unit on an industrial site. We therefore went into an unwanted hibernation until 2011.

Plans were afoot for an aeronautical museum to be built over the 1905 Trafalgar Dock. In the meantime, a metal building was erected adjacent to the dock, to house the trams and a boat rescued by the Dunkirk Little Ships Restoration Trust. Ownership of trams 11, 38 and 715 was transferred to the Solent Sky aviation museum, and these three vehicles were moved to the new building in 2011.

We renamed ourselves Southampton Tram Project as car 57 was no longer in our ownership, having been passed on to Hampshire County Museums Service in 2000. Work therefore resumed, concentrating on car 11, and in the ensuing nine years our small team made considerable progress with the final finish on much of the interior, along with the glazing. We managed to earn the respect of the larger team working on the ‘little ship’ Dorian.

The grandiose Aeronautica museum plan had long since fallen through and accumulated artefacts, including the Calshot Spit lightship mounted on the dockside next to us, became unwelcome in the commercial port. Once more we were given notice to quit, this time by Easter 2020.

Thanks to Solent Sky Director Alan Jones, and a donation by a project member, a similar but much smaller building to the one we had was erected in just three days at the museum site, just in time for the COVID lockdown to intervene. This took the pressure off our move, and the adjacent cruise terminal went eerily quiet. 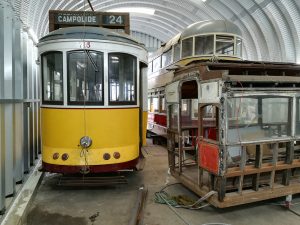 ‘All is safely gathered in’;
at the end of the day we could close the doors. Further moves created some working space, and much material is stored in an adjacent unit.

We were able to organise the transport of the three cars for 27 August 2020. A great deal of preparatory work was done, and endless quantities of other material also had to be shifted. With a large crane at either end (barely a mile/1.5km apart), a low-loader moved the trams one by one. Car 715 went first and dug itself obstinately into the asphalt at the new site; 38, on casters, followed; then finally 11, also mounted on steel casters like a giant wardrobe, followed without a hitch.

In contrast, 715 on its tram wheels caused a headache, being hard to push along, let alone slew sideways. We finally got all three within the doors, the final positioning following later. The docks workshop was eventually fully vacated in mid-November.

So in 2020, after over 40 years, the project had its own premises, as part of an accredited museum. We are able to welcome visitors and hope to attract more grant funding. The Tramway & Light Railway Society organised a very successful model tram event in October 2021; this brought funds, publicity and two more volunteers to the project.

The Southampton fleet of four-wheel cars was, until 1938, constricted by running through the mediaeval Bargate. Early vehicles had back-to-back knifeboard seating upstairs; from 1923 a fully-enclosed dome-roof design was adopted. 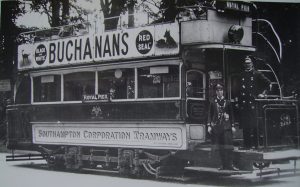 This is how car 38 is to be restored: Re-posted from
three to four windows, but retaining the square platforms and short canopies. Courtesy of M. Petch collection

Built by Hurst Nelson in 1903, car 38 is a sister to car 45 at Crich. It was rescued because the bodywork was in far better condition than similar car 57. A new underframe was fitted in the 1990s and the platforms removed. The intention is to restore the car to its non-canopied condition of c. 1913; it retains many more original features than car 45. We have an ex-Porto Brill 21E truck for 38.

Car 57 is one of the first batch of knifeboard cars built at Portswood in 1910; the body was used as a chicken hut near Romsey and is in relatively poor condition. Mounted in a wooden cradle, it was in the care of Hampshire Cultural Services until recently and by now should be in out-of-town storage courtesy of Solent Sky.

In 1923, car 11 was built as open-top 3. Following the success of the dome-roof design that year, it was rebuilt with that feature in 1925 and renumbered. Withdrawn in 1948 after accident damage, it went to the scrapyard but was bought privately and used as a wendy house near New Alresford. We were amazed that a tram of this design had survived, and the fast-deteriorating remains were moved to Millbrook in 1979.

The main focus of our efforts has been car 11, and the bodywork is largely complete. A Brill 21E truck was acquired from Porto and an old Glasgow Subway bogie donated wheels and motors to create a correct low-height version. This truck is in need of attention after storage in a damp container and the wheels need reprofiling. Other outstanding tasks are mainly the electro-mechanical elements and re-canvassing of the roof.

Lisboa 715 is one of the famed 700-class of hill-climbing trams; built in the mid-1930s it served the city until withdrawal in the mid-1990s. Acquired by the project initially for its electrical and running gear, car 715 is being conserved as a potential runner, in the hope that future regauging may be possible.

Other tram bodies survived around Southampton. We have a complete end from ‘Preston’-type 87, which could form
a future exhibit, along with a few parts of ex-London B-class 78.

While it may seem incredible to some that it has taken so long to get this far, readers should bear in mind that restoration work is not straightforward. We often have to think very hard about each job, with little tangible evidence of what the detail was like, or how it fits into a complex structure with few straight lines.

We have always been a small band, working with minimal funding, at a pace we can manage. Progress can be seen on our Facebook page; if any reader wishes to make a donation, we can be contacted via Facebook or the Editor.