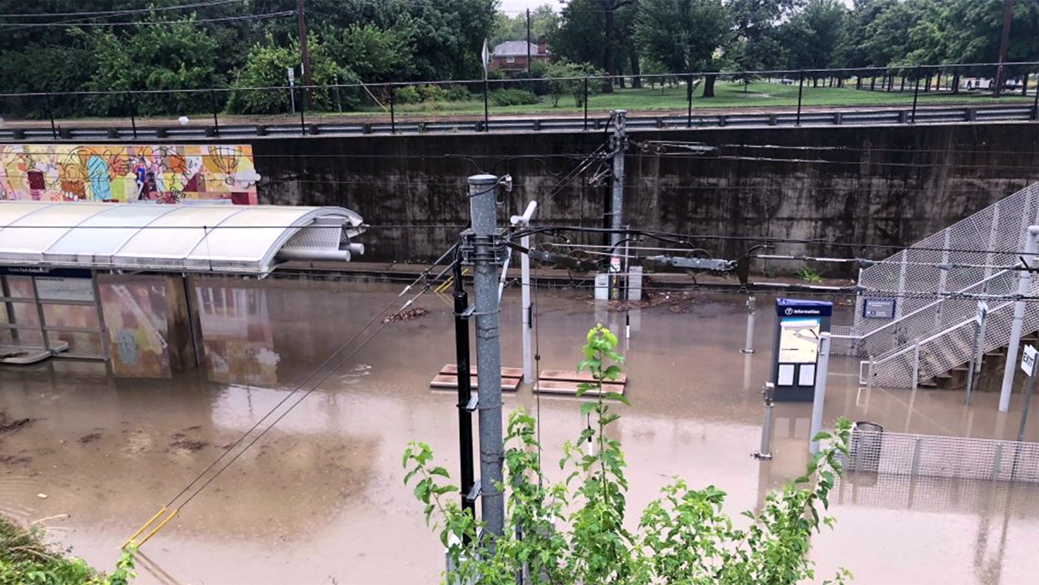 A view of the floodwaters in St Louis on 26 July. Courtesy of Metro Transit

Metro Transit (St Louis, US) reports that damage caused by record rainfall last week could incur repair costs of USD18-20m. Over 280mm of rain fell in just eight hours on the morning of 26 July, flooding the light rail system’s eastern subway tunnels and forcing the evacuation of an LRV which became stranded near Delmar Loop station on the Red line.

Engineers are working to repair damaged tracks, communications and signalling systems on the system’s worst affected section between Forest Park-DeBaliviere and Delmar Loop. Two vehicles are believed to be damaged beyond economic repair: the Siemens LRV and a Call-A-Ride shuttle which was also caught in the flooding.

Metro Transit has requested emergency federal and state funding to cover its losses and fund the works, expected to last up to two weeks.

MetroLink is currently operating a 20-minute service, with speed restrictions, between Central West End and Shiloh-Scott on the Red line and between Shrewsbury-Lansdowne I-44 and Skinker stations on the Blue line; there are no Blue line operations east of Skinker until further notice.

Bi-State Development President and CEO Taulby Roach said that the 74km (46-mile) light rail network had not experienced this level of rainfall since its 1993 opening: “What occurred on 26 July was beyond our control and we ask our riders to be patient in the days and weeks to come as we work through these unprecedented challenges to fully restore MetroLink service.

“In the meantime, we are transporting MetroLink riders by bus shuttles between stations where the trains are unable to operate. We recognise it is not as convenient for our customers and their commutes are taking longer than normal because traveling by bus is not as fast or efficient as taking MetroLink. Many of these operators are working long days and overtime so please thank them when you see them.”