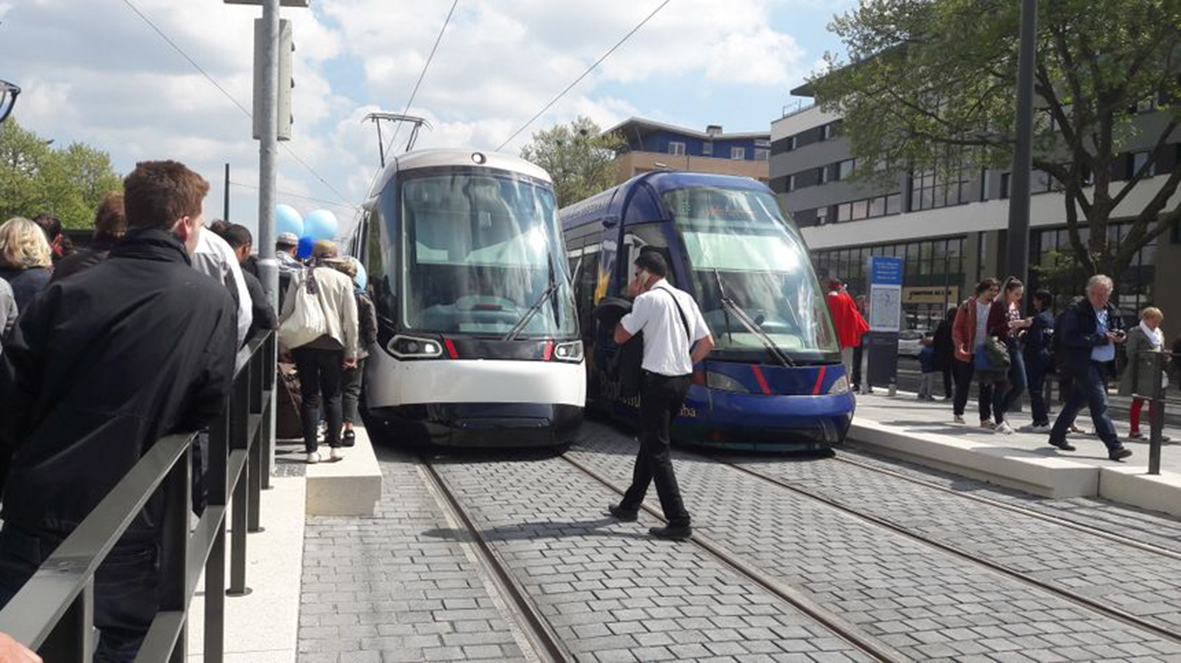 The two inaugural Citadis trams ready for their parallel traverse of the new international tramline. (Image credit: A. Gambet)

The weekend of 28-29 April saw the inauguration of passenger service on the new tramline across the river Rhein from the French city of Strasbourg to the German town of Kehl.

Strasbourg line D was extended by 2.7km (1.7 miles) from Aristide Briande over two new bridges (one over the inland port of Strasbourg, the other over the international waterway) to Kehl railway station. The new Rhein bridge has been named after Beatus Rhenanus (1485-1547), a French writer, humanist and philosopher, who lived in the area. The EUR93m project attracted EUR19m from the German Federal Government; 1.7km (one mile) of the new line is on German territory.

Line D runs across the Rhein from 04.45 to 00.04 on weekdays, and 05.27-00.02 on Sundays, with trams every five minutes during peak periods. From 2 May an additional service to Pont-du-Rhin was introduced, where older Strasbourg trams can reverse before the bridge used by the international service. The international operation is provided by a fleet of 12 45m Alstom Citadis 403 100% low-floor trams equipped for BOStrab regulations, including two repainted in a special livery to mark Strasbourg’s place in the European Community of 28 nations.

Following the opening ceremony at 10.00 on 28 April a 24-hour service was provided over the weekend as citizens queued for an inaugural free ride. The last tram to make a similar journey was in November 1944, when Alsace and the city of Strasbourg returned to French sovereignty towards the end of World War Two. Electric trams were inaugurated in December 1894, after 17 years of horse and steam tram operation; the current tramway system in Strasbourg was inaugurated in 1994.