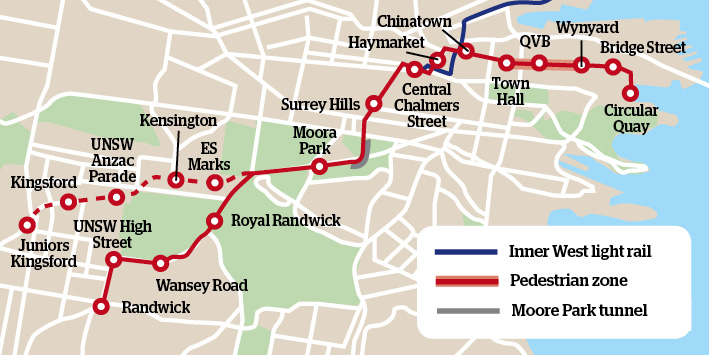 The new tramway serves the city’s central districts; the route to Kingsford is due to open in a couple of months’ time.

Australia’s largest city inaugurated the first stage of its South East Light Rail Line linking Circular Quay in the city centre with Randwick in the south-east suburbs (L2) on 14 December. A branch to Kingsford (L3) should open in March, bringing the city’s tramway network, operated for Transport for New South Wales by Transdev Sydney, to 24.7km (15.3 miles).

The cost of the South East LRT project has risen from AUD1.6bn (EUR1bn) to AUD2.96bn (EUR1.84bn), due to the outcome of a dispute with Spanish contractor Acciona (which received AUD576m (EUR359m) in compensation for utilities problems). Major construction began on the 12km (7.45 miles) of routes in October 2015, but was hampered by poor knowledge about underground services, especially in the city centre along George St. This section (Bathurst St to Circular Quay) features Alstom’s proprietary APS surface current collection system; elsewhere overhead with pantograph current collection is used.

Operating from a new depot at Randwick, 60 five-section Alstom Citadis (001-60) have been delivered for operation in coupled sets to carry 13 500 passengers/hour/direction. Lines L2/3 cross line L1 at a flat crossing near the Chinatown stop (with connecting curves), but there is no in-service interoperability due to the respective specifications of the Alstom and CAF trams used and the loading platform profiles. New speed limits have been introduced for highway traffic where trams operate (on part of George St the 40km/h limit has been reduced to 20km/h).

Service is provided 05.00-01.00 with eight-minute peak headways, using coupled sets of 33.5m Citadis X05; a 67m pair can carry up to 450 passengers. Although initial running times of 50 minutes were scheduled, this is to be accelerated to 38 minutes once the operation has bedded in. Bus services will not to be cut back until March.

A further 12km tramline is under construction in the suburban area of Parramatta (Westmead to Carlingford) for completion in 2023. This will be worked by 13 45m CAF Urbos 3 trams with wire-free operation.