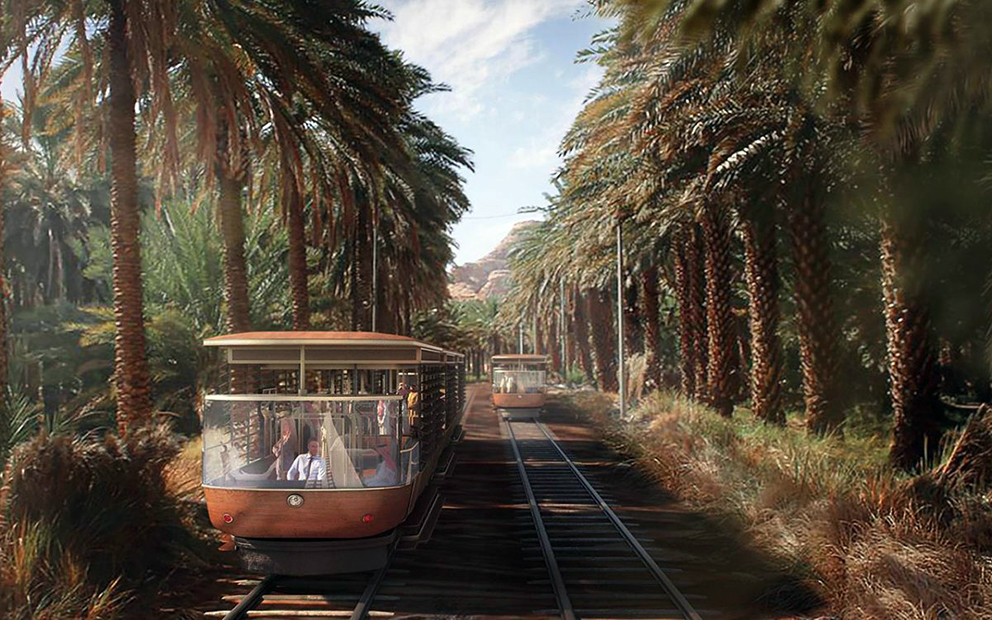 As part of the ‘Journey Through Time’ masterplan, SYSTRA will design the first phase of a modern tramway project for the AlUla valley. Royal Commission for AlUla

The Royal Commission for AlUla (RUC) has appointed SYSTRA as design partner for the first phase of its planned 46km (28.5-mile) tramway to connect cultural, archaeological and urban development sites in north-western Saudi Arabia.

SYSTRA will create a modern interpretation of the historic Hijaz railway which once passed through the AlUla valley, transporting passengers over 1300km (800 miles) from Damascus in Syria to Medina in Saudi Arabia. Responsible for systems integration and rolling stock design, the company will also undertake preliminary and detailed design for the 22km northern (13.5-mile) line’s infrastructure, architecture, landscaping, stops and depot for completion in 2023.

The first ‘Red’ line will form the backbone of the County’s ‘360 Mobility’ programme which saw the launch of autonomous pods in the Old Town earlier this year. This itself is part of the wider 15-year ‘Journey Through Time’ masterplan to responsibly and sustainably develop the core historical area of AlUla.

Comprising 15 stops between AlUla Central Hijaz railway station in the south and Hegra – a UNESCO World Heritage site – in the north, nine will be designed as interchange hubs for sustainable travel options such as cycles; on-demand electric vehicles; camel and horse connections; and car parking where allowed.

A second 24km (15-mile) phase will extend the route to the south of the county, including a connection to Prince Abdul Majeed bin Abdulaziz International Airport. Further introduction of electric buses and new cycle paths all aim to meet the RCU’s commitment of making AlUla carbon-neutral by 2025.

Moataz Kurdi, RCU’s Chief County Operations Officer, said: “The low-emission service will follow a carefully planned rail line connecting AlUla’s main tourist and heritage sites, as outlined in our Journey Through Time project, allowing people to move freely and easily without the need to rely on buses or personal cars.”