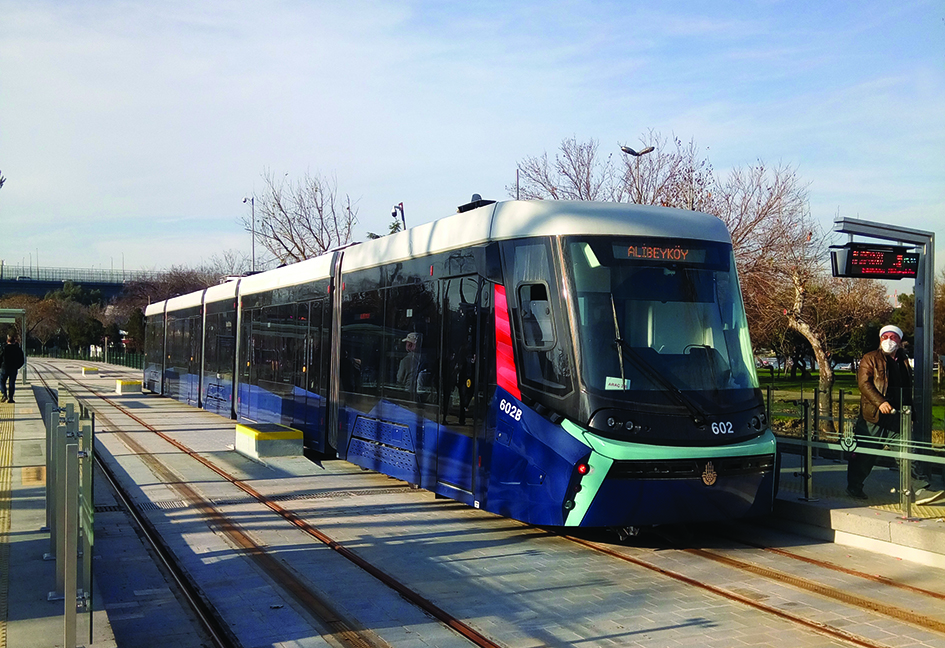 Istanbul’s Golden Horn is an inlet off the Bosphorus, an historically-important harbour and now the location of the city’s fifth standalone tramline.

The first 8.8km (5.5-mile) section of standard-gauge tramline T5, from Cibali to Alibeyköy Cep Otogari bus station, was inaugurated at 12.00 by Istanbul Mayor Ekrem Imamoglu on 1 January. Due to coronavirus curfews in Istanbul passengers were not carried until 4 January, followed by ten days of free rides.

This is the first time a licensed version of APS has been fitted to trams built by a manufacturer other than Alstom. This wire-free solution was chosen to preserve the historic landscape by removing the need for overhead wires. Parts of the tramline are built on piles above the water.

The civil engineering contractor was Dogus Construction; its contract for trackwork and electrical systems was signed in October 2016. Work began in March 2017 and was planned to be completed in 2019, but was delayed in 2018-19 by changes in the city administration.
The project cost EUR153m.

The first phase offers interchange with metro line M7 at Alibeyköy station. The 1.4km (0.9-mile) two-stop extension from Cibali to Eminönü is due to open in 2022 (a bus shuttle is operating until then) and will offer transfers with metro line M2 at Küçükpazar and the city’s first tramline, T1: Kabatas – Bagcilar, and ferries  at Eminönü, although there will be no track connection.