Tampere: Another reason to smile 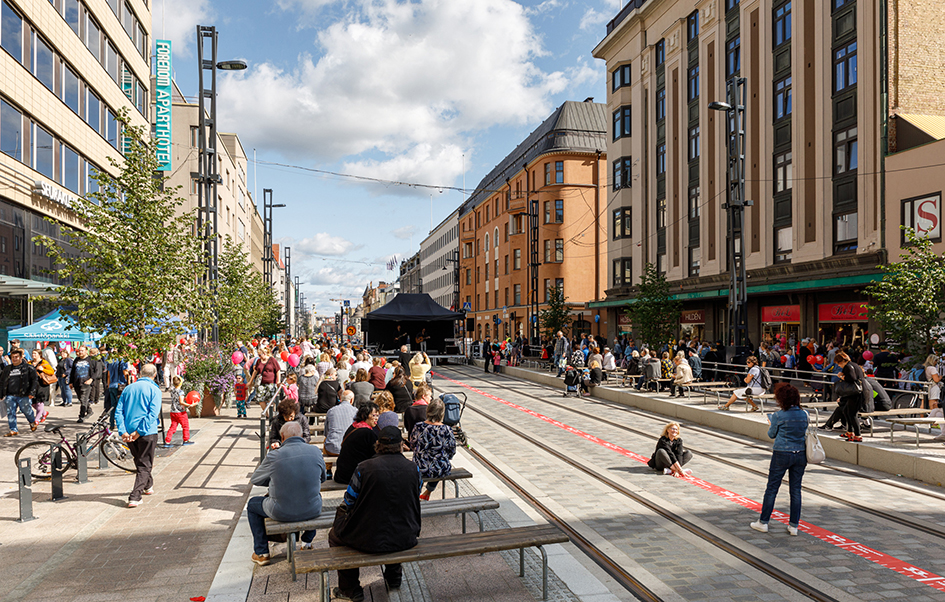 A ‘block party’ on Hämeenkatu over the weekend of 24 August drew thousands of excited city residents. Image courtesy of Pasi Tiitola / City of Tampere

Every new tramway scheme has its unique challenges, but the project to deliver a new light rail operation for Finland’s third-largest city, Tampere, has faced some rather unusual ones. Siberian flying squirrels and overly-enthusiastic tree cutters were just two of the unforeseen issues when planning began for a new double-track line tramline through the heart of what is described as ‘the happiest city in the world’.

Antti Haukka, Project Manager for the City of Tampere, gave an insight into construction progress at this July’s UK Light Rail Conference in Manchester: “We call Tampere the ‘Manchester of Finland’ as we were also at the heart of our own industrial revolution, and we have had many similar challenges over the last 200 or so years.”

Approximately 160km (100 miles) to the north of the nation’s capital, Helsinki, Tampere’s industrial heritage of cotton and paper production is pronounced. However, those prominent red-brick factories at the heart of the city have long since closed, repurposed as the city has evolved to support a new industrial wave of advanced engineering, computing and biotechnology. This is supported by a strong focus on the region’s culture and a burgeoning tourism industry.

With a population of 235 000 (2019 figure), Tampere has topped recent polls for being the most attractive city in Finland in which to live and work, with its population also cited as the ‘happiest people in the world’. However, like many other prosperous and growing cities around the globe, this popularity brings its own issues related to congestion, particularly in such a compact city centre. The key goals of the tramway project therefore are to make everyday transport easier across the municipality, as well as supporting the growth and development of the urban area and further increasing the city’s appeal.

Although the city’s first ambitions for a tramway date from 1907, these were set aside during the turbulent years surrounding the two world wars and were shelved in favour of more cost-effective trolleybuses in 1948; these were subsequently replaced by motor buses in the 1970s.

Situated between two substantial lakes (Näsijärvi and Pyhäjärvi – the height differential between the two providing fast-moving rapids that help generate much of the city’s electricity), geography means that plans for the tramway fall within a relatively confined area, where the city is most densely concentrated. A cost-benefit analysis from 2016 showed that a tramway would be the most efficient method of achieving fluent and punctual transportation in the municipality, in preference to buses – which were calculated to require 225 buses to achieve the same level of service as 25 trams. It concluded that light rail investment could be doubly recouped through land use, real estate and ticket revenues.

So it was that in 2016 the city authorities finally gave the go-ahead for a modern tramline, with a vote of 41/25 in favour of the scheme. Mr Haukka added: “We had various plans for tramways in the last 20 years, and finally in 2016 we had the historic decision. They debated the issue for around ten hours – they even made a short movie from these interesting conversations.”

Main construction began in 2017 with an estimated project cost of EUR238.8m (infrastructure, rolling stock not included), Mr Haukka said: “We’re now past the halfway mark, about 66% complete. We have 12.4km (7.7 miles) of tracks already laid and will have 14km (8.7 miles) laid by the end of the year. The last 18 months will be mostly for installing catenary and technical systems, testing and commissioning.”

Although the initial tram order specifies 37.3m three-section cars, platforms are being built to 47m to allow for additional sections as and when they may be required.

At the same time, planning is underway for a second phase – a north-western branch that will see the system extend 7km (4.4 miles) from the 2021 terminus at Pyynikintori to Lentäväniemi via Lielahti. In March 2019, the Tampere City Board approved the street plans in Federleynkatu, Niemenrannanaukio and Kehyskatu to enable this to proceed, as well as initial plans for Sepänkatu, Paasikivenkatu and Rantatie adjacent to the city centre. Approval is expected by autumn 2020, with opening of the second phase in 2024. A long term target is to expand the Tampere Tramway network across the neighbouring municipalities, totalling 43km (26.7 miles).

Design and construction of the phase one infrastructure and depot is being undertaken by the Tramway Alliance (City of Tampere, YIT Construction Services, NRC Group Finland and Pöyry Finland). Mr Haukka explained one of the key benefits of the ‘alliance’ approach as being a more flexible way of managing construction: “There were two bridges in the first phase, but when we discovered Siberian flying squirrels in the forest [a protected species in Finland] we had the people and plans ready but couldn’t go ahead with the first one. Any delay would jeopardise the timely completion of the whole project, so we needed to act quickly.”

Under this collaborative model, the project team quickly took the decision to ‘flip’ the construction of the two bridges, so the team tasked with building the southern bridge was reallocated to construct the second bridge instead: “After a year we had resolved the zoning issue with the flying squirrels so we could proceed with the delayed bridge. This is just one example of how by flipping these two objects we could stick to the overall schedule”.

Alongside construction of the new tramway, streets in the heart of the city are being rebuilt in sympathy with their new surroundings along the main thoroughfares. “It’s not been easy,” Mr Haukka commented, adding a cautionary tale about the importance of stakeholder communications. Hämeenkatu, a 30m-wide main street with four lanes of road traffic was to be remodelled with two lanes (for tram and bus traffic) and allowing extra space for bicycles and pedestrians, at the same time banning cars from the city centre. Part of this programme involved felling trees, something the contractors undertook with premature enthusiasm: “Our builders said we should just do it, we could just cut the trees. But we underestimated the importance of those trees to citizens – it’s a really delicate thing to cut down trees, we learned”. However, technology prevailed as digital models were created to allow residents to see how replanting and grass track installation would look in the future.

Utility works and tracklaying followed, which – not unusually – met with a level of opposition from residents. Although on an international scale Tampere’s tramway project isn’t one of the largest by any measure, it is by far the biggest infrastructure project the city has ever seen. “When people come in from other countries, bigger cities, they don’t quite understand the problem. But for the people of Tampere this has been a huge challenge,” Mr Haukka explained.

With major sections of track now laid, there is at least visible evidence that any inconvenience and disruption associated with tramway construction will result in a better living environment overall: “We can at least show them how nice it will become… even if the opening is still 18 months away.”

As part of this city re-engineering process the values of each cityscape were thoroughly assessed, particularly in areas such as Kaleva and Hervanta that feature nationally-significant cultural locations, so the tramway could be sensitively adapted to its urban surroundings. The rebuilding of Hämeenkatu, the main street that runs through the city for about 1km (0.6 miles), was added to the scope of the project in February this year. A picturesque boulevard running from the railway station to Hämeenpuisto Park, it is paved entirely with cobblestones and contains the Hämeensilta Bridge that crosses the Tammerkoski rapids, affording stunning views. Work here will focus first on construction of phase one of the tramway, with the sections of the street and pavement following in 2022.

Construction of the depot began in 2018 and the building is now taking shape with partitioning walls clear to see, while the laying of tracks is underway inside the storage hall. The depot and its yard will be ready for test traffic in January 2020.

Operations are to be handled by national railway VR Group following a competitive tender process. Six parties prequalified, with three selected for the shortlist before the contract was confirmed in April 2019. The contract covers two-and-a-half years of preparations followed by 12 years of operations and maintenance, with the option of a three-year extension. Test running is to take place from April 2020 and VR is to employ between 50 and 100 staff.

Power to the people

One of the goals from the outset was to encourage “open and proactive” communication in relation to the project, with public events, themed workshops and site visits to “inspire active dialogue”, according to Mr Haukka.

Accordingly, city residents were heavily involved in the design of the Škoda ForCity Smart Artic trams they would be riding from August 2021. An order for 19 three-section vehicles was placed in 2017 under a EUR104m contract that includes options for a further 46. The low-floor trams will have a maximum speed of 70 km/h (43.5mph) and capacity for 264 passengers. Although the majority of the vehicles’ components will be made in Finland, some will come from Škoda’s facilities in the Czech Republic.

As well as a public vote on the livery (which resulted in 59% of the 23 578 votes cast opting for red), a mock-up was created and groups were given tours of the Transtech factory. “They gave us valuable feedback,” Mr Haukka added. “If someone said “It would be a nice to have a pole ‘here’”, we could get a member of the design team to bring one in so we could ask, ‘Is it better now?’” In total, 15 visits were made to the factory to refine the design, resulting in the final half-length mock-up that was publicly debuted in a special event held in the city in February 2019.

Again, the people took precedence on the first day. “The first people to see the new tram were two six-year-old girls,” Mr Haukka joked. “Not the mayor, but the citizens of Tampere”. The six-day event drew an overwhelmingly positive reception.

The first car is due to arrive at the depot in January 2020, with test running to take place in March. The first commercial ‘pilot’ services will begin in April 2021, during which time bus services in the city will continue as normal. Four months of this will follow, with 9 August 2021 settled as the ‘actual commercial’ launch: “The second stage is more important for operators and planners and so on, but 1 April is more important for the people: that’s the party date,” Mr Haukka explains. In the meantime, special events are being held along the line to mark key construction milestones, embedding the new tramway within the community even further.

This grass-roots involvement is something the city feels is crucially important in gaining support. Mr Haukka explained: “It’s been really challenging to tell people to wait four years when all they see is a construction site making their daily life harder and harder. But this is clearly a positive thing. Out of the 15 000 people who attended the tram launch, most were really happy to see how it looked.”

Tampere’s tramway is progressing according to the Alliance’s best laid plans, within budget, and with the support of a fully-engaged public – who themselves can look forward to riding the new tracks when the line opens in 2021 and adding it to their list of things to be happy about.