A ten-point plan for Light Rail in the UK 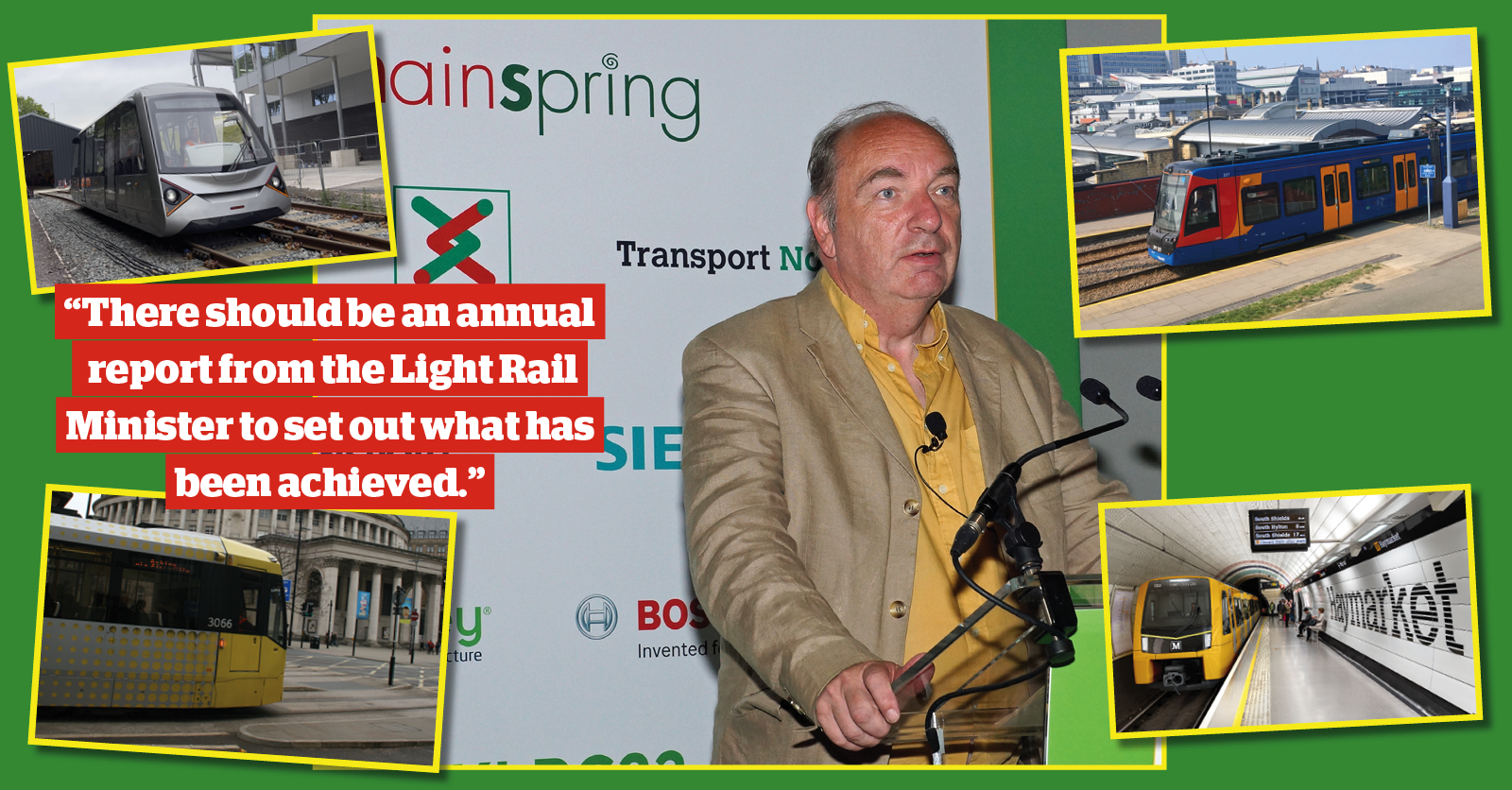 Norman Baker outlined a vision for the future of light rail in the UK. N. Pulling/Mainspring

Norman Baker, UK Light Rail Minister from 2010 to 2014 and now External Relations Director for Campaign for Better Transport, sets out a simple vision for the future.

We know light rail works. It works for passengers, for economies, for communities, and for the environment. In the latter case, light rail is responsible for just 0.13% of the UK’s transport emissions, which is basically nothing.

During my time in the Department for Transport I pushed to get these benefits recognised – and we had a number of successes. However, the growth we hoped for in the wake of the Green Light for Light Rail report I initiated in 2010 hasn’t really materialised. So, to give light rail the platform it deserves to deliver for more towns and cities in the UK, I have come up with a simple ten-point plan.

Next, we need to look at the 1992 Transport & Works Act to determine whether it is still fit for purpose, where it can be simplified, and how we can reduce the time between a scheme being put forward and the date it is given permission to start construction.

We then need to encourage the Government to look at areas of the country, in conjunction with local authorities, to identify where light rail may be the sensible answer. It is only right and proper for towns and cities to come up with solutions to serve their own communities, but the Government needs to be more proactive in saying ‘we think there’s a gap here where light rail may fit, how can we help?’

Leeds is a great example. Oft-quoted as the largest city in Western Europe without mass transit, it’s outrageous that it doesn’t have a light rail system. There are many others.

Then we need to reallocate funds. Recent news reports have been filled with promises to cut taxes, and various spending pledges have been made. You cannot make money from nothing of course, but we have a GBP27bn (EUR32bn) road-building programme which doesn’t make logical sense at a time when we are trying to reduce carbon emissions.

We all know, not least from the DfT’s own 1992 Advisory Committee on Trunk Road Assessment, that new roads add more traffic. You cannot build your way out of traffic jams, you just move them or make them bigger. You also cannot have a sensible transport policy based upon road-building so the Government should reallocate a significant chunk of that GBP27bn to improving local public transport provision, including of course light rail.

Next we require a system which allows local authorities to levy business to fund public transport interventions in the way that has happened in London and across Europe. Versement mobilité  has worked wonders in France and while some might say it’s an unnecessary tax on business, we’ve seen time and again that light rail schemes benefit the economy massively. So where is the real objection? Nottingham has achieved incredible things through its Workplace Parking Levy – and I’m surprised that other areas haven’t taken forward this learning in the 11 years since it was introduced – so initiatives like this should be standard procedure.

We need to investigate better and cheaper delivery. Light rail schemes can be expensive, but with better co-ordination and the sharing of best practice we can avoid some of the issues we saw in Edinburgh. That tramway cost around GBP71/km (EUR83m/km);
new schemes should be about a quarter of this – if not less.

On a related point, promoters should explore Very Light Rail and other ‘non-traditional’ technologies which may be cheaper, but also more appropriate. I’m following the progress in Coventry closely as this could open the door for more, and smaller, cities.

Next we come to integrated ticketing. When you get in a car, you go from A to B and in the driver’s mind the only real ‘cost’ is the petrol – one simple purchase. Making the same journey by public transport you may end up moving from bus, to tram, to train, and not only will you have to change vehicle, but you will also likely have to make some new arrangement to pay. That doesn’t strike me as being very user-friendly.

When I was in the DfT, Eurostar struck a deal with Greater Anglia to provide through tickets
from Norwich and Ipswich to Brussels and Paris. By having one ticket, sales on Eurostar jumped by 10-15%. The journey wasn’t any cheaper, it was just more convenient, proving that through tickets are a very powerful incentive. That’s where I see one of real gains is going to come from for light rail.

Mobilise effectively. The importance of local champions is vital, so getting the support of as many people ‘on the ground’ as possible – politicians, local businesses and community groups – will always give you a better chance of success.

Finally, there should be an annual report to Parliament from the Light Rail Minister. This would set out what has been achieved in the previous year, and the Minister could then answer questions as part of a proper debate on light rail. Having this kind of annual commitment would get those in power to really concentrate their minds.

If we deliver on these points, we can build a powerful case for investment in light rail. I want to see the enthusiasm I see from cities and the industry resulting in real schemes which better serve passengers, boost the economy and help clean up the environment. It can be done.

> Norman Baker was the Liberal Democrat Member of Parliament for Lewes for 18 years from 1997, and a Government Minister from 2010 to 2014 with a portfolio that covered public transport and active travel.

After Parliament, Norman became Managing Director of The Big Lemon, an environmentally- friendly bus and coach company in Brighton, where he won many new contracts and updated the fleet. He now acts as adviser to the Campaign for Better Transport, is a regular columnist and broadcaster, and undertakes a wide range of consultancy and lecturing work.