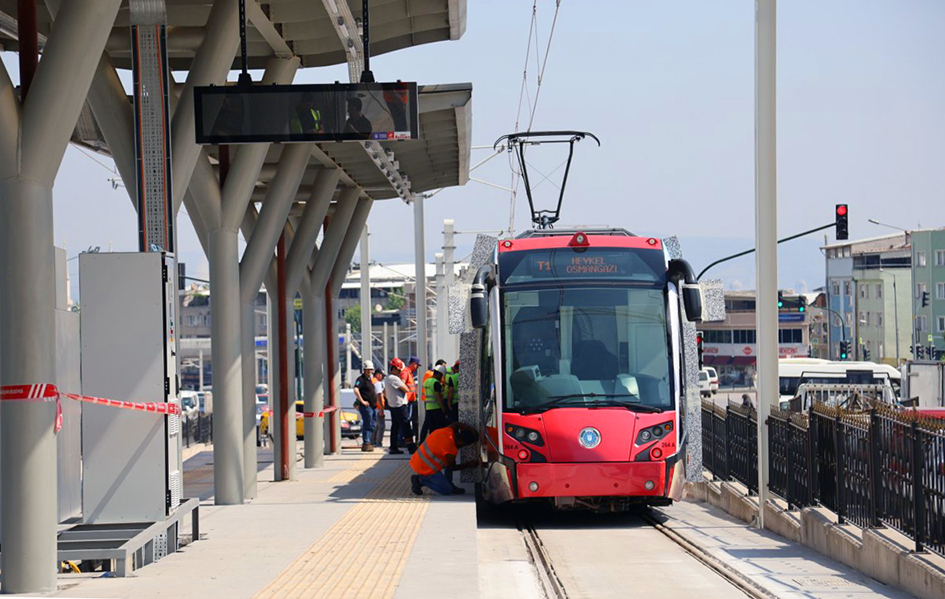 Low-speed clearance trials underway on Bursa’s T2 tramline on 27 May. Municipality of Bursa

Gauge testing on the T2 tramline (Kent Meydanı – Bus Terminal) in the Turkish city of Bursa began on 27 May. Construction contracts for the double-track line were signed in November 2016, but adverse economic conditions and rapid rises in the inflation rate in Turkey have delayed completion of the new 9.5km (six-mile) line.

Due to open in June, the 11-stop T2 will complement Bursa’s T1 city centre tram loop (6.5km/four miles) which was inaugurated on 12 October 2013, and the 2.2km (1.4-mile) T3 heritage operation along Cumhuriyet Caddesi (Avenue of the Republic) which opened in 2011.

The first Durmazlar Silkworm tram ran from the depot in Kültürpark in the morning and completed its normal T1 loop before entering the new line from a branch near Osmangazi. In addition to tracklaying and overhead line installation, the T2 project has included the construction of three rail and two highway bridges, six substations and a new depot.

With 8.4km (5.2 miles) running on segregated ballasted track in the median of Yalova Yol, commercial speeds on the new tramline will be much higher than those achieved on T1.