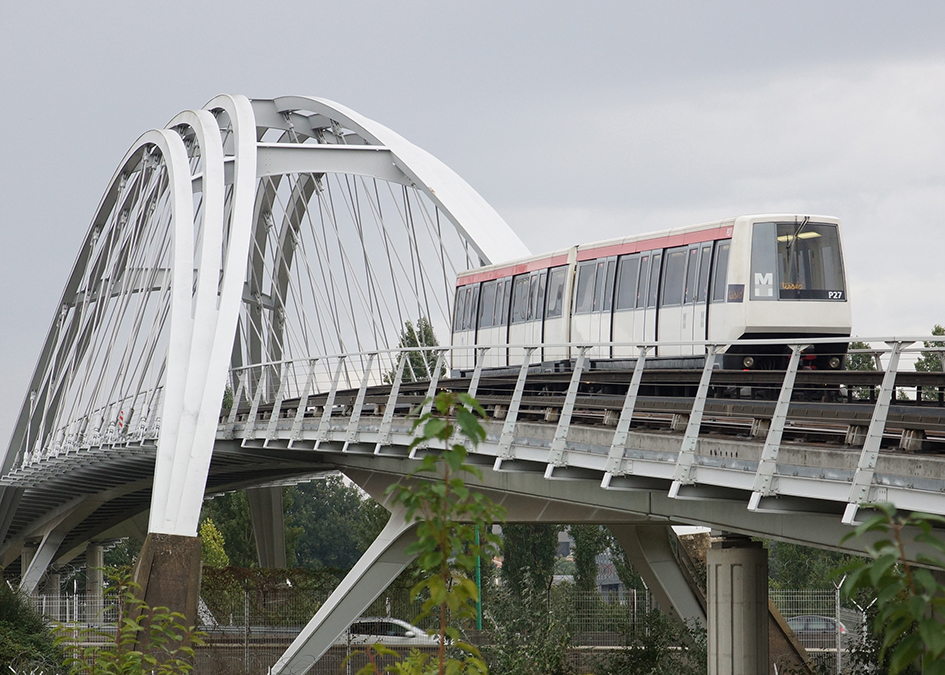 VAL 206 P27 (from the original Matra fleet) near Jolimont station on metro line A; it was from Joliment that the extension to Balma-Gramont opened in December 2003. Image courtesy of Neil Pulling.

Toulouse sits proudly in the heart of south-western France and is home to 1.3 million people across the city’s metropolitan area.
It is also one of the nation’s great industrial success stories; since 2010 no other city in France has experienced greater demographic and economic growth.

Accounting for 47.2% of strategic jobs in the region, Toulouse is emblematic of the territory’s attractiveness to the aerospace and technology sectors. The so-called Aerospace Valley – a cluster of engineering businesses and research centres – has a significant
number of members from both industry and academia living and working in the city.

According to January 2017 census figures from the French National Institute for Statistics and Economic Research (Insee), Toulouse had the highest population growth of any city in the nation over the previous 12 months, with 8000 new inhabitants choosing to relocate to the region. The city has also experienced the strongest demographic growth outside the Greater Paris region. Consequently, Toulouse is a leader in terms of job creation, employing more than 70 000 across the private sector in the last ten years alone – increasing the workforce to 500 000.

It is this rapid growth that is at the core of a series of major infrastructure developments, including an expansion of the metro and a new express tramway link. Both are planned for completion within the next seven years.

Reducing reliance on the private car

This new urban mobility plan is designed to promote the use of public transport in preference to the private car, particularly for short journeys. The ultimate goal is to reduce all road traffic while simultaneously increasing public transport use, walking and cycling, predominantly in the densest urban areas.

As such, a focus was initally placed upon development of the metro network as a backbone for the transport system, later including at-grade systems such as tramways and Bus Rapid Transit (BRT).

Since the election of Mayor Jean-Luc Moudenc in 2014, the local authority has renewed its focus on sub-surface solutions to minimise the impact on road traffic during construction. This approach has resulted in the decision to build the metro’s third line, with a preferred route approved in December 2015. But alongside this predominantly underground project, there are also plans to deliver a new tramway line to link the third metro line with Toulouse-Blagnac Airport. An extension of metro line B in the south-east will also connect to the future third metro line.

The underlying aim of these three projects is to deliver structured transport solutions that provide reliable links to the city’s main employment hubs. This joined-up approach is perhaps best exemplified by the design for a fully automated third metro line, linking Toulouse’s aerospace industry in the south-east with the aeronautics sector in the north-west; the line will also travel under the city and offer an important new connection to the main railway station (Matabiau).

A history of engineering excellence

With a long history of successfully delivering projects in the city, engineering consultant SYSTRA is heavily involved with this latest series of transport projects. In April 2018, the company was appointed as project management assistant for the third metro line.

The company’s relationship with the city’s transportation dates back to 1985 when it was involved with delivering line A, the city’s first automated VAL metro line (Lille and Paris also use the technology, from 1983 and 1991 respectively). After initially joining as design engineer, the company was subsequently appointed as assistant project manager for the civil engineering phases.

With work beginning in 1989, the first VAL line, connecting Basso-Cambo in the south-west and Jolimont in the north-east, opened in June 1993. A subsequent four-station eastern extension from Joliment to Balma-Gramont opened in December 2003.

Moving forward ten years, the company was tasked with carrying out the preliminary design for the third line, its work being recognised in 2017 with a BIM d’Argent award for the Infrastructure Project category.

As part of this role, SYSTRA is responsible for defining a functional programme. The manufacturers bidding for the project will then identify technical solutions and resolve any additional requirements during the tender phase. The second aspect of the contract provides technical project management and supervision of the systems installation following the appointment of the contractor.

The design phase for the EUR2.669bn third metro line project began in 2016 and construction is to start in 2021 for completion in 2025. The team will use Building Information Modelling (BIM) tools throughout both the design and construction phases to efficiently plan and deliver the new line. While the majority will run on sub-surface routes, 30% will be above ground so a key challenge will be building connections across busy motorways for the south-eastern section of the line.

The ambitious scheme is projected to offer commercial speeds of over 40km/h (25mph), serving 21 stations across a 27km (16.8-mile) line. An estimated 200 000 daily commuters are projected to use the line to connect to other metro routes, as well as five national (SNCF) and regional (TER) train stations.

When the third metro line opens, passengers will be able to travel to Toulouse-Blagnac Airport in around six minutes from the new Jean Maga station. There will also be two intermediate stops – Nadot and Daurat – on the 2.5km (1.6-mile) Ligne Aéroport Express (LAE) tramway. When fully operational, this EUR45m line is expected to operate to five-minute headways.

An interchange design to minimise transfer times between the third metro line and the LAE has been investigated for Jean Maga; ensuring that services run efficiently on the existing tramway is also a top priority.

Facing similar challenges related to the existing line, the extension of metro line B will require the construction of complex intersecting structures. Delivery of the 2.7km (1.7-mile) ‘Connexion Ligne B’ will involve a new tunnel under the Canal du Midi, as well as a bridge over a busy motorway, and two new stops 55m in length and 13m high.

This project is currently in the tender phase, with design to start in 2019 and works to begin in 2021. Once open in 2025, the extension is forecast to enable an additional 14 000 journeys per day.

With all three projects completed and open in 2030, public transport travel times should be equivalent to, if not more competitive, than the car. As well as time savings, the reliability of these public transport modes promises to be far superior. Intermodal travel will become easier and there will be increased opportunities to use public transport across the whole region, especially connections with regional trains.

However, merely delivering new metro and tram projects is not enough when creating a truly comprehensive public transport network. A further 3000 spaces will be created through the construction of park-and-ride areas along the main interchange points of the route. New schedules will also be created for commuters and the urban bus network will be restructured to offer competitive drawdown.

In addition to park-and-ride enhancements, several other measures will be used to facilitate the use of the metro when it is complete. Bicycle parking spaces, improved bus stations and drop-off and car-sharing zones will be sited close to metro stations to improve accessibility as well as promoting other modes of travel around the city.

Preliminary studies for all three projects have optimised alignments in order to alleviate road traffic, also cutting carbon emissions on the city’s road network. This focus on reducing the environmental impact of transport in the region is underlined by the fact that the metro and tram projects are all designed to be carbon neutral.

This ongoing development of the transportation system is at the heart of a forward-thinking city committed to ensuring its networks can sustain the demands of a growing population to 2030 and beyond.

Each new phase of work is underpinned by a holistic approach to delivering a reliable and sustainable transport network that will continue to function efficiently for generations to come.