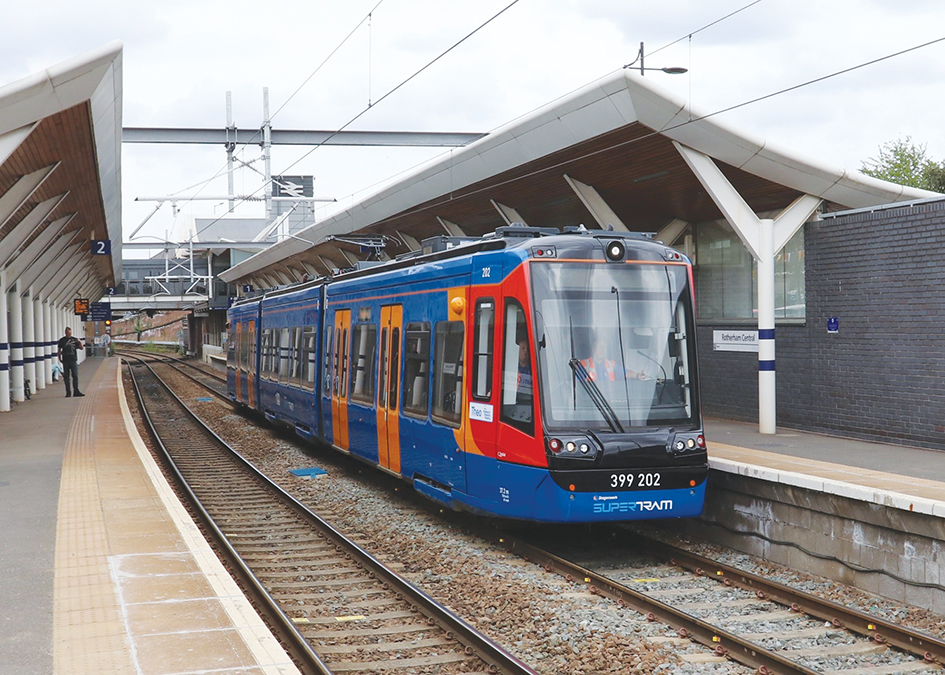 The launch of the South Yorkshire tram-train service in October 2018 was a significant debut, linking a tramway to the UK’s national rail network for the first time.

This groundbreaking pilot programme was only possible through close collaboration between the three principal project partners – Network Rail, South Yorkshire Passenger Transport Executive and Stagecoach Supertram – and its success has been proven by its popularity with passengers, demonstrating how the tram-train concept could work in the UK.

When the pilot began there were no off-the-shelf models or templates; solutions were borne from technical innovation and close working relationships. There were many challenges along the way, and originally a key Government objective surrounded the creation of a summary of knowledge, data and learning in the form of a report.

It quickly became clear, however, that a combination of the wealth of information collected and the intense interest from the industry meant the partners needed to create something much more comprehensive, sustainable, and longer lasting. This included clear and easily digestible data on the costs, benefits and safety requirements of operating a tram-train on the UK’s national rail network; assessing the potential for lower infrastructure capital and maintenance costs compared to alternative rail or tram services; and understanding the level of demand to be derived from the new technology.

The Tram-Train Learning Hub was thus conceived from the beginning as an account of how the pilot was achieved and the result is another UK first – an online repository dedicated to all aspects of tram-train project delivery and operations. It has now become an essential industry resource.

The importance of honesty

Many schemes once commissioned deliver a minimal amount of ‘lessons learned’ material, constrained by intellectual property or confidentiality concerns. This can make it difficult to obtain maximum value when information is unable to be shared. In many cases the lack of access to such experience comes at a price later on.

All of the information on the Learning Hub is therefore provided on a transparent and non-discriminatory basis. It contains details of contracts and regulatory processes, including documents rarely openly available to those beyond a project’s internal teams.

Only the bare minimum of information has been withheld to comply with GDPR or to protect commercial confidentiality.

By sharing technical detail and experience directly from the individuals and teams who delivered and operate the service, future promoters are gaining vital knowledge on the ‘dos’ and ‘don’ts’ of applying tram-train technology in the UK. Of course, lessons are only truly learned with a candid appraisal, so the Hub presents its information without spin and in a ‘warts and all’ manner.

Over 300 individual learning points are posted online, each aligned to a specific theme or topic. The Hub also includes more than 300 resources such as reports, regulatory documents and performance data, and over 150 images and videos.

Although owned and managed by Network Rail, its comprehensive coverage is testament to the hard work of all the delivery partners. Nowhere else in the UK is such detailed and comprehensive light rail knowledge gathered and available to all.

The Hub’s concept and design are simple. It is not complex nor bespoke, using an established collaborative software tool which costs less than GBP500 (EUR600) per year to maintain. Furthermore it can be accessed without any need for additional software or system enhancements.

As well as being low-cost, it also requires only light touch maintenance. There’s no army of web designers or document controllers in the background; a team of two manage the site and work with colleagues in the partner organisations to source, evaluate and input the information and resources.

The development and continual evolution of the Hub is overseen by a dedicated steering group which trialled various data sharing platforms before deciding on SharpCloud. Thereafter a programme of resource identification and collection was created to ensure that the knowledge from all the project members was captured. Importantly, members of the steering group hold each other to account for the timely creation and quality of included information and resources are shared to deliver each workstream. This avoided the need for formal contractual relationships, contributing to the low running costs and value for money.

Through its deliberately straightforward system design, the information from the pilot has been arranged in 58 logical storyboards with intuitive navigation.

Going live in November 2020, the Hub now has over 210 registered users, from 60 organisations. It is testament to its perceived value and simplicity of navigation that its users span not only the UK, but also Australia, Denmark, Germany, Italy, Latvia, New Zealand, Switzerland and the US.

An independent study by CPC Project Services in 2018 estimated that the costs of future tram-train schemes could be up to 40% lower than the pilot. This will only be achieved by avoiding the pitfalls experienced by the project teams and adopting the lessons learned from them. Furthermore, in 2011 consultancy WSP performed an assessment of the value to the industry of the learning from the pilot. At today’s prices that estimated value is over GBP20m (approx. EUR24m).

As an example of the value of this information to scheme promoters, project clients and their consultants, detail of the design and assurance of low platforms is currently being used extensively in Transport for the North’s Northern Powerhouse Rail programme. Moreover, Transport for Greater Manchester is using the Hub to gain a greater understanding on the design and operation of the tramway/railway interface in the emerging design for its own tram-train programmes.

This resource is additionally being actively employed to directly benefit a further range of modern light rail developments. Projects in Greater Manchester, South Wales, Lancashire and South Yorkshire are seeing the direct benefit of the Hub as a guiding resource.

The Hub and the team behind its creation were recognised in the Project of the Year Under EUR50m category at the 2021 Global Light Rail Awards.

An example of one of the 58 individual storyboards contained in the Learning Hub, showing the extensive range and type of information provided. Image courtesy of Network Rail

Building for the future

A year after the pilot operating period officially ended, this resource continues to develop as the partners add more information and data and aspire to keep it as a growing contemporary learning resource.

Looking forward, it provides a remarkable legacy resource of making tram-train a reality in the UK. Its ongoing impact not only touches future light rail schemes, but offers the opportunity to grow a wider light rail learning legacy.

The effectiveness of the Hub has been proven by its users, too. A survey in July 2021 found that 90% of respondents were happy with their overall experience, with 84% saying the site met or exceeded their expectations on its level of detail.

The Tram-Train Learning Hub has potential to develop into an industry-wide asset that could become a collaborative knowledge hub, which embraces the full spectrum of light rail in the UK.

An example of one of the 58 individual storyboards contained in the Learning Hub, showing the extensive range and type of information provided. Image courtesy of Network Rail

The Learning Hub dissects the entire tram-train project, with details of how complex technical and operational hurdles were overcome:

• How was the wheel profile created for the hybrid tramway/railway operation?

• What were the deviations to industry standards needed for tram-train operation and how were these secured?

• What does the tramway/railway interface look like and how does it operate?

• How is a failed tram-train rescued on the railway?

• How was the end-to-end timetable developed?

• How was the low platform for the tram-train vehicle designed and assured for use?

• What is the safety case for tram-train operation on Network Rail infrastructure?

• How was the tram-train vehicle commissioned on both Supertram and Network Rail systems?

• What approval method is required for tram-train and other non-standard rail vehicles?

• What are the legal and regulatory agreements to enable tram-train operation in the UK?