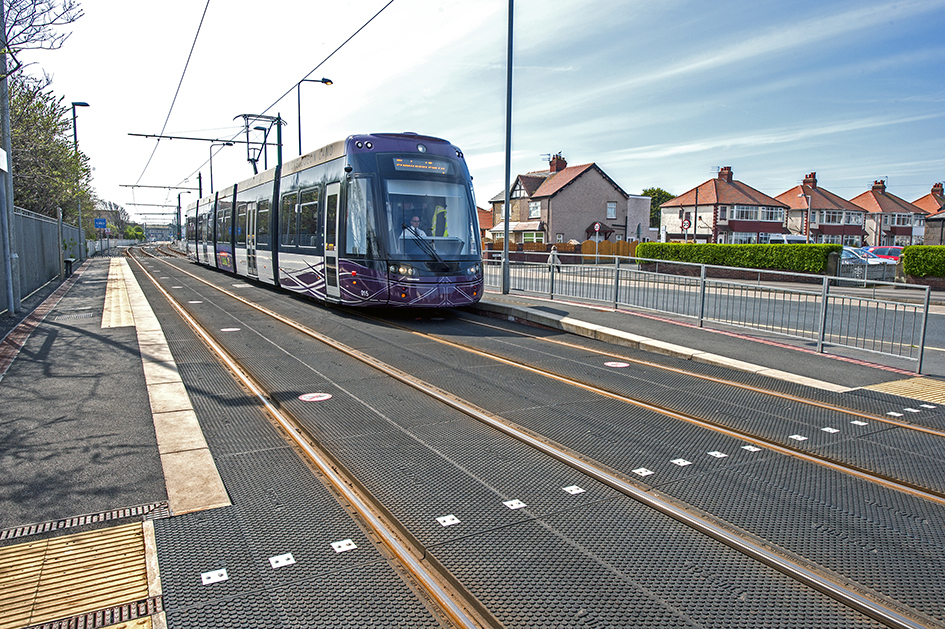 Blackpool’s tramway uses Rosehill Rail's Baseplated system for both the crossing and under-run protection; the solid rubber panels can be cut to fit around fishplates, check rails and turnouts. Image courtesy of Rosehill Rail

Crossing an active tramway or light rail system offers many potential hazards, and each must be carefully considered by the designer, constructor, operator and maintainer.
While collisions between road vehicles and trams and LRVs are of course undesirable, they are unlikely to result in serious injury for either party as there are certain levels of protection that exist in the coming together of metal-on-metal. It is a different matter for those who – for the purposes of this article – we will define as non-motorised users (NMUs):

•  Cyclists, skateboarders or those on roller skates/rollerblades 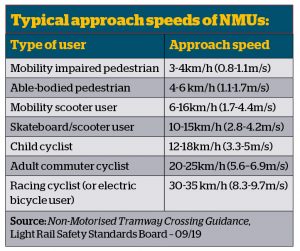 Where it is determined that a crossing is necessary, a number of variables deserve careful consideration. As Dan Snell of crossing manufacturer Rosehill Rail explains: “The first questions we ask are about the location, expected traffic types and at what speeds, the frequency of use, and the speed of the rolling stock going over it. We try and get in at the early design stage if possible as this always gives a better chance of specifying the most suitable solution.”

Jordan Smith from STRAIL UK echoes these sentiments – clarity from an early stage is crucial: “If someone says ‘we’ve got a footpath’, the first thing we ask is ‘is it actually a footpath, or does any other form of traffic use the crossing?’ If there is a chance that a horse could go over it, for example, then we would recommend a heavier-duty infill panel for safety.

“It is also important to evaluate the ground conditions. If the crossing is to sit on ballasted track, is the ballast stable and does is it have adequate drainage? If the crossing lies in a dip or valley, decent drainage must be supplied so water doesn’t get to the crossing or wash away the trackbed. The edges of our panels are slightly rounded, and naturally there is a very slight camber. They also feature pyramid-shaped ‘lozenges’ so water doesn’t dwell on the surface and you get maximum grip in all conditions.”

Even after installation, frequent assessments should be made of all crossings and detailed records kept which are then entered into a system’s asset register. For such surveys it is essential to regularly assess traffic flows and types of user, taking into account any specifics that may relate to each location
that may have changed. For example, crossings near a sports stadium may feature low traffic levels during the week, but become very busy at weekends.

Detailed logs of both actual incidents and near-misses will also reveal potential hazard hot spots and room for improvements – these should be actioned promptly. At locations with a high number of incidents, it may be advisable to install video cameras linked to the tramway’s control centre to identify both likely causes and any unusual user behaviours.

In street environments with high pedestrian densities, clearly-defined paths over the tram track are necessary, with dropped kerbs and guard rails provided where appropriate.

With the prevalence of hand-held devices that encourage NMUs to look down for much of the time, it is worth considering additional measures such as coloured floor surfaces, while tactile finishes also delineate the edge of the hazard zone to alert visually-impaired or distracted users. It is recommended that such crossings should be co-ordinated with those of any shared or adjacent carriageways to ensure the smooth flow of surrounding traffic.

Where the route is fully-segregated, the preferred arrangement is to separate the crossing points for adjacent roads and the tramway. Here, as well as in more rural surroundings, deterrents should be provided to discourage trespass outside of the designated crossing area. Fencing or guard rails to highway design principles should be provided where necessary, to guide pedestrians to face oncoming trams before they cross the track, or to direct their attention to pedestrian crossing lights.

A number of ‘anti-trespass’ solutions exist that can also be easily installed. As Mr Snell explains: “We are the only manufacturer of anti-trespass panels designed specifically for tramways. Our new conical system is suitable for all types of tramway rail and is made from the same recycled material as our crossings.”

In every situation, consideration should be given to visibility of NMUs by tram drivers and by return visibility of approaching trams by those using the crossing. The requirement for specific signalling measures will depend on factors such as sight lines and traffic frequency. For example, if the sight lines along the track are good and the volume of traffic is low, it may be possible to dispense with pedestrian signals when other circumstances would dictate signalling for the road crossing.

The Clappers Lane heavy rail crossing in East Sussex (UK) has no artificial light sources. A solution such as these PedeSOLAR LED panels provide clear demarcation of the safe crossing area at night. Image courtesy of STRAIL UK

Installing rubber infill crossing panels on Bucharest’s tramway; a typical crossing – with good ground preparation – can be installed in under an hour. Image courtesy of Rosehill Rail 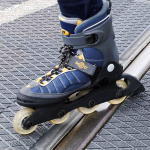 Waddon Marsh in Croydon has all the elements of best practice for a suburban, segregated tramway crossing: clear sight lines and lighting, appropriate signage, tactile paving, well-tended foliage, barriers and chicanes to prevent track access beyond the crossing and under-run protection over the ballast on both sides. Image courtesy of STRAIL UK

An example of anti-trespass panels on the Nottingham Express Transit system, a clear deterrent to those looking to stray onto the tracks. Image courtesy of Rosehill Rail

Visibility is the key

Approach speed affects the time for users to react and respond to the presence of both the crossing and trams. Poor sighting distances will almost certainly require faster NMUs to reduce their approach speed more, and these crossings should therefore be designed with enhanced signage and demarcation accordingly.

As the majority of tramway crossings are on shared routes, a higher design speed for faster traffic should always be the default position unless a site-based assessment concludes that sufficient controls are in place to reduce the approach speed to that of a pedestrian.

The design of non-highway sections remote from tramstops should likewise start with the assumption that chicane barriers and/or bollards will be fitted unless a risk assessment demonstrates otherwise.

As should now be clear, one of the most effective protections is clear signage and markings that delineate the swept path of the rail vehicle in relation to the crossing. Each country will have its own standards and guidance, but any such signage should be implemented in such a manner that it is clearly visible from each side of the crossing.

Crossings themselves can be coloured with a durable paint finish, applied to concrete or paved surfaces as well as rubber crossing panels. As Mr Snell explains: “We’ve developed a primer and paint in conjunction with a leading thermoplastic paint specialist, which is approved by Network Rail. The paint can be applied quickly and easily as part of the overall crossing installation process.”

As crossings are used at all times of day, suitable lighting must be based upon an assessment of the circumstances of each location. Where a mains electricity supply is not readily available, solutions such as pedeSOLAR incorporate LED units moulded flush into the crossing panels. LEDs are robust, long-life, maintenance-free and can be powered by separate solar panels. As STRAIL’s Mr Smith explains: “This is a popular option where it is cost-prohibitive to install additional lighting, or where there is another impediment that leads to reduced visibility. This solution comes at a premium, but it is easily offset where the costs or complexities of installing additional lighting are apparent.”

Where sight lines are obstructed by buildings, foliage or curves, there may also be a requirement for audible warnings. These should be enough to penetrate the consciousness of, say, a headphone-wearer or those with reduced hearing capability, and overcome background noise without causing a nuisance to nearby residences or businesses.

It is important to ensure that all crossings offer low slip potential and a flat surface, with adequate drainage to minimise the effects of water, snow and ice. A well-installed system should provide many years of reliable service with minimal maintenance.

Most crossings are either set in concrete or, for more modern installations, use rubber panels that are easy to both fit and remove for track maintenance. Made from recycled car, bus or HGV tyres, these hard-wearing panels come in various stiffnesses depending on the traffic flow and offer a more environmentally-friendly, high-grip solution.

The advantage of either cold-cured or heat-pressed rubber panels is their durability and versatility; the material has negligible expansion or contraction properties and has been tested down to -30°C and up to 60°C.

Mr Smith adds: “We market all our systems as ‘fit and forget’, as operators and infrastructure managers as a rule like to get 15 years life from a crossing decking. We warranty our heavy-duty systems for five years, but have panels out there that have been in place for over 25 years…”

Mr Snell tells TAUT that no special tools are required for his company’s panels and that experienced contractors can install a 10.8m crossing in around 45 minutes if the necessary ground preparation works have been done in advance. Rosehill Rail offers a free training service to show contractors how to fit its systems.

The key difference between tramway and LRT crossings and those used on heavy rail systems is in the curve radii, he suggests, although it is always preferable to choose a crossing location that is on a straight and level section of track. While many crossing panel systems are designed with the ability to be cut to fit on-site if necessary, the direction of travel over the track should, wherever possible, be perpendicular to the rails as the flange gap becomes more of a hazard when traversed at an acute angle. Likewise, gradient changes can add extra hazards and should be minimised.

Although street-running tramways primarily use a grooved rail profile – where eliminating the flangeway is problematic – for off-street sections, products are available that offer a flush surface across the rail while maintaining the easy passage of trams and LRVs. For example, the veloSTRAIL solution uses a honeycomb rubber element, made from the same recycled material as the infill panel, that compresses under the weight of a rail wheel. Resisting compression up to a weight of around 160kg, the compressible wearing element returns to its original position once the vehicle has passed. Popular in Europe, this solution is more often used on heavy rail crossings and, it is claimed, has reduced incidents of wheel traps to zero where installed.

In the worst case scenario, where an NMU does come into contact with a moving tram or LRV, under-run protection should be provided on either side of any crossing on ballasted track to give a flush surface. The length of such protection depends on the likely tram speed at the given location, but should never usually exceed 10-15m (20-30m in total).

As Mr Smith concludes: “One UK tramway we supply has renewed over 20 crossings in their entirety, adding ‘four foot’ infill panels for around ten metres each side of the crossing. It’s unlikely you will get dragged under a modern tram as there’s a skirt at the front, but it’s better to be pushed along the surface of a rubber panel than onto ballast and sleepers.”