‘While tramways do come at a cost, the barriers to new systems are clearing…’

TAUT caught up with SYSTRA CEO Pierre Verzat to gauge his views on today’s light rail landscape, new technologies, and his predictions for the future.

Q: As SYSTRA has expanded, what have been the key changes that have driven your transition from a pure transport planning and engineering specialist?

Since our formation we have operated from A to Z, from initial transport planning to final project delivery. There are of course changes in the way we are modelling and designing, and this is due to digitalisation.

It is clear that the increased usage of digital tools is pushing everyone up to the asset management level as we all have far more data. This is adding new business for us as from the initial digital model the client is then asking us for assistance in delivery of the BIM model. They understand that this is a complex task, so they also ask us to manage this for them. It is becoming a true business to manage the BIM model for clients and help them to build around this solution, including operations and maintenance.

Today, I would say that consultancy, including transport planning and engineering for mass transit and rail, is around 85% of our business as there is still a great need for engineering expertise in the development of new solutions for transport – metro, tramway, rail, highway – as we face challenges such as climate change and urbanisation.

Q: A lack of provision for renewals was a common reason for the closure of first-generation systems, so with more data are we finally moving toward a view of full lifecycle costs?

I agree that this is not always well-structured in terms of anticipated budgets. Knowing that the decision is a political one, nobody wants to increase the budget by adding costs which could be exposed in ten years. However, at the same time it’s not always easy to make these costs available – and I’m not sure that stakeholders are often ready to hear them.

It is certainly easier today to precisely monitor the level of deterioration of your network and the data is available to better plan preventative maintenance; something which can more accurately fit the reality and not just having to replace assets every five, ten or 20 years due to historical investments.

But as those infrastructures belong to public authorities who have annual budgets, it is not so easy for them to adjust to the realities as they prefer to plan for scenarios where ‘in five years’ time we will need to ask for some money from our electors because we need to pay for this or that…’

That said, new possibilities made available by digital management tools and collecting and analysing data should help public authorities make savings in the longer-term.

Q: Your latest tramway commission is in Saudi Arabia and this has a number of interesting technical challenges. Can you tell us a little more?

The contract for the AlUla tramway is interesting as it will fulfil a more touristic role and avoid adding more buses and cars to the roads, so this is quite a specific application.

It will be catenary-free and there are clearly technical challenges as the landscape is an oasis. In an oasis you have water everywhere, under the ground at a very low level, and this can cause major environmental issues.

We saw this with the tramway in Ouargla, Algeria, so we have some experience, but it is still a major technical challenge. The other issue is the proximity of the tramline to cliffs. There is an obvious risk of rocks falling on the tracks, so you have to balance the tourist interest with safety of the passengers.

As the route serves heritage sites from different periods, you also want to stick with the style as it is a global historic experience and this starts at the stop. You don’t want to disembark from a stop which is from the 21st Century, and then have an ancient temple or very old house next door. 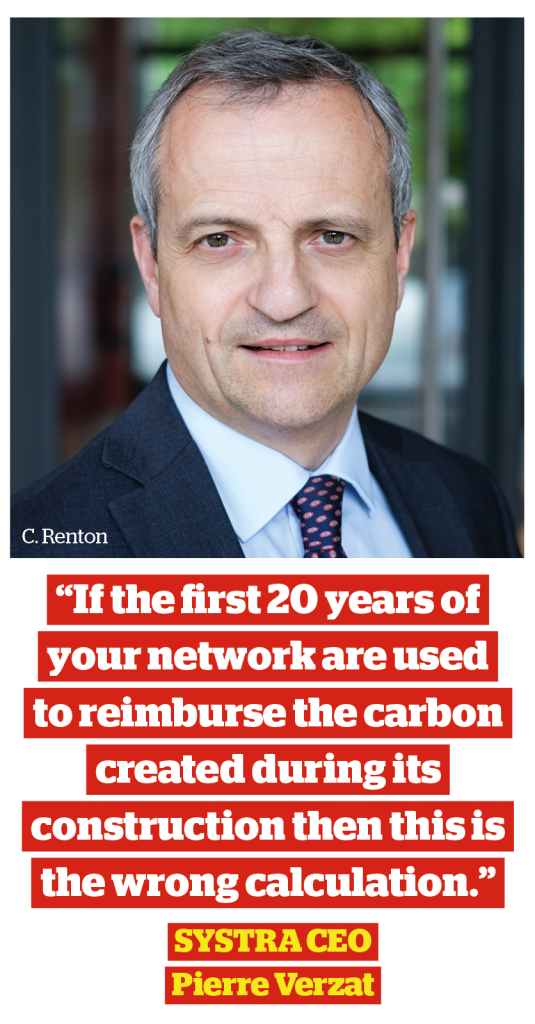 Q: What are the other significant technologies driving new projects?

There has been a general trend for many years around the need for catenary-less operation. For over 20 years we have been working on these solutions – third rail, battery, supercapacitor – and they are becoming more and more efficient.

But there are many other innovations, including ways to more easily construct tramways. A challenge for us has always been the weight and a necessity to manage very expensive utility diversions, so if we can have a very light system which is able to re-use a normal road we will save a lot of money. There is some good development in this area.

Another point which is emerging during the construction phase is the carbon footprint, and this is driving low-carbon solutions. It is not enough to say ‘a tramway removes 100 000 cars per year from the roads’. No, if the first 20 years of your network are used to reimburse the carbon created during its construction then this is the wrong calculation.

We need to think differently about our use of materials and our construction methodology, and SYSTRA has a massive focus on sustainable design. We have developed a specific tool called Carbontracker and with this we can anticipate the environmental impact of a future system in terms of construction and operations. The design can then be optimised to provide the client with an estimate of the footprint of any proposed infrastructure.

These things are our clients’ top priorities.

Q: Accepted wisdom is that tramway and LRT systems can only be justified in a town or city with a large population – but with some of the innovations you’ve outlined should this wisdom be challenged?

You have the true extreme in the Dubai tramway which had costs similar to a metro as it was very challenging technically. But other cities are making some very simple choices and you can have a low-cost solution to fit smaller cities – but this mainly comes back to the trackform.

If you do not have to do too much preparation before you install the track, then it is possible to reach a very low price level if you are building at-grade and if your tramway is light enough.

The other main issue is to provide the room to install the system and working out how you compensate other vehicles in order to create the corridor for the tramway. This is not so simple sometimes, and in particular in smaller, older cities where you do not have the façade-to-façade room to install a network. So that can be a limiting factor.

While it is true that tramways come at a cost, I think the barriers to development are clearing. Budgets will always be a barrier, but on the other hand authorities are more and more keen to invest in public transportation to offer an alternative to private cars.

Q: There is a lot of discussion currently about the role of autonomous operation in the light rail sector. What is your view on this?

Globally there is a trend towards more and more automation: in rail, in metro, in taxis, everybody wants a driverless solution. This is not so much a matter of making cost savings on the driver, it is more about the flexibility of a network. 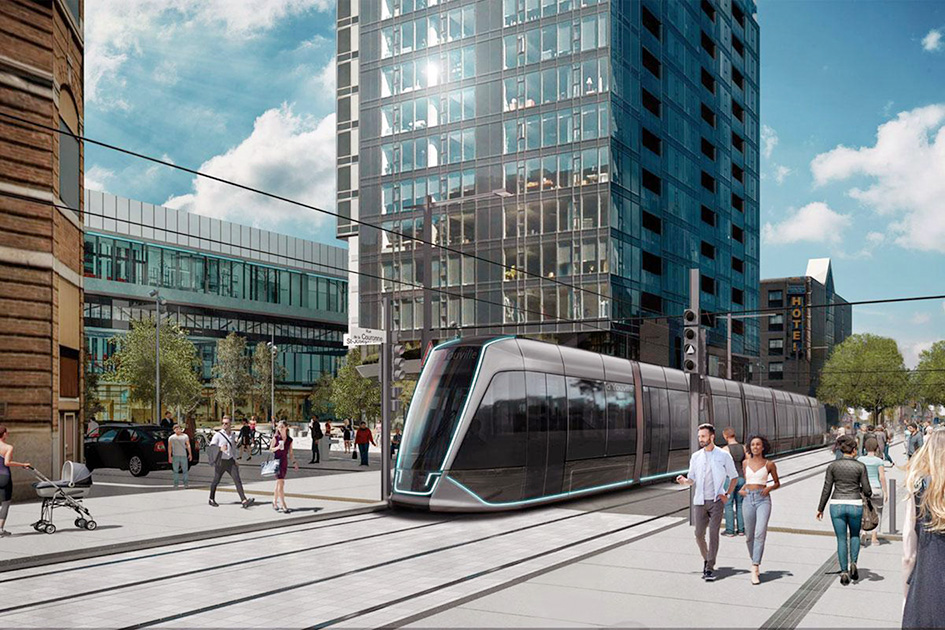 The company is also involved in the development of a modern tramway for Québec City in Canada. With its own unique challenges in terms of urban integration, this system is planned to open in 2028. Courtesy of Ville de Québec

When you have a driverless metro it is easier to inject a new vehicle into service or to adapt headways to match the demand. Having said that, it’s efficient on a metro as it’s relatively easy – although relatively expensive – to manage a segregated network. Tramways, on the other hand, have the same issues as Uber or Tesla as it is not so easy to have a completely autonomous vehicle running in city traffic and to inject additional vehicles into the network.

There is some experimentation, for example it’s fine to have autonomous driving in a depot, but frankly speaking a driver is always better managing the safety of the passengers and the people surrounding the tramway in city traffic. It’s also a matter of social acceptance. So whether it is worth proceeding with this for tramways… I’m not sure it is a top priority.

It could make sense for providing connections for the last kilometre outside of the city as this type of small autonomous shuttle is not so fast, not so heavy, and can brake immediately. In this way it is easier to manage than a tram which is relatively heavy and relatively slow to brake when it has 100 or more people on board.

The move to autonomy is massive, but what would really help the development of tramways is a possibility to connect with a capillary network of shuttles able to collect passengers for the tramline. The dream is of course to completely replace cars from our cities’ streets with an integrated network of tramway, metro and autonomous shuttles to give people the possibility of a true door-to-door solution.

Even if I am an engineer and I like to work on complex projects, the key issue is to serve the people. What is their need? The need for the passenger is to get from door A to B as easily as possible. They don’t care if it’s by tramway or by metro – they just need their journey to be simple, safe and without carbon emissions.

> An excerpt from a full interview which appeared in TAUT 1017 (September 2022). Order your copy here.