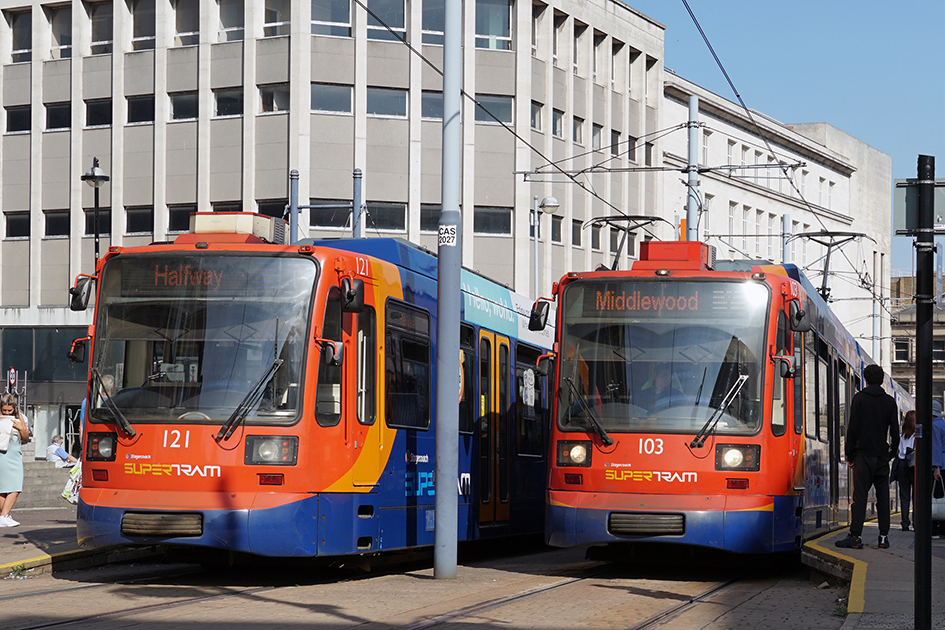 Sheffield Supertram now has confirmed funding for upgrades and renewals, including replacement of its 28-year-old fleet of Siemens-Düwag trams; 121 and 103 at Castle Square in September 2021. Image courtesy of Neil Pulling

The UK Chancellor of the Exchequer has committed GBP6.9bn (EUR8.15bn) towards tram, train, bus and cycle projects as part of his October Budget package. However, only GBP1.5bn (EUR1.75bn) is actually new funding, as the total also includes a variety of transport funding packages presented in 2019 and 2020.

Greater Manchester is to receive the largest amount – GBP1.07bn (EUR1.26bn) – for new tram-train vehicles, bus corridors in Bury and Ashton-under-Lyne, and improved integration of walking and cycling routes. Further expansion of the Metrolink light rail network is also planned, with the Department for Transport confirming funding for a feasibility study on extending tram service to Bolton town centre earlier in the month. Other routes under study include those to Stockport and Middleton.

Almost as much, GBP1.05bn (EUR1.24bn), is to go to the West Midlands for Metro expansion, including completion of the 11km (seven-mile) Wednesbury – Brierley Hill extension and continuation of the ‘Sprint’ BRT programme between Walsall, Solihull, central Birmingham and Birmingham Airport. The funding is also expected to go towards development of new Metro lines in Dudley, Sandwell, Walsall and Wolverhampton, plus the roll-out of Very Light Rail in Coventry.

South Yorkshire will receive GBP570m (EUR667m) to begin a Supertram renewal project – the original Siemens-Duewag fleet is now approaching 30 years old and other infrastructure improvements are required – as well as other projects around active travel and the installation of a ‘Dutch-style’ roundabout with priority for cyclists and pedestrians in Barnsley.

Other recipients are: West Yorkshire (GBP830m/EUR971m), for a cycle ‘superhighway’, electric vehicle charging points and mass transit planning; Liverpool City Region (GBP710m/EUR830.5m), for new and renovated stations in Liverpool and Runcorn as well as an interchange project at St Helens; West of England (GBP540m/EUR631.7m) for a prioritised bus route between Bristol and Bath; and Tees Valley (GBP310m/EUR362.6m) for upgrades to Darlington and Middlesbrough stations and improved rail links. All projects will need to be costed and agreed by the Department for Transport.

Chancellor Rishi Sunak said: “Great cities need great transport and that is why we’re investing billions to improve connections in our city regions as we level up opportunities across the country.

“There is no reason why somebody working in the North and Midlands should have to wait several times longer for their bus or train to arrive in the morning compared to a commuter in the capital.

“This transport revolution will help redress that imbalance as we modernise our local transport networks so they are fit for our great cities and those people who live and work in them.”

Scotland, Wales and Northern Ireland will receive extra funding through the Barnett formula – a mechanism the UK Government uses to allocate additional money to the devolved administrations when it spends more in England.