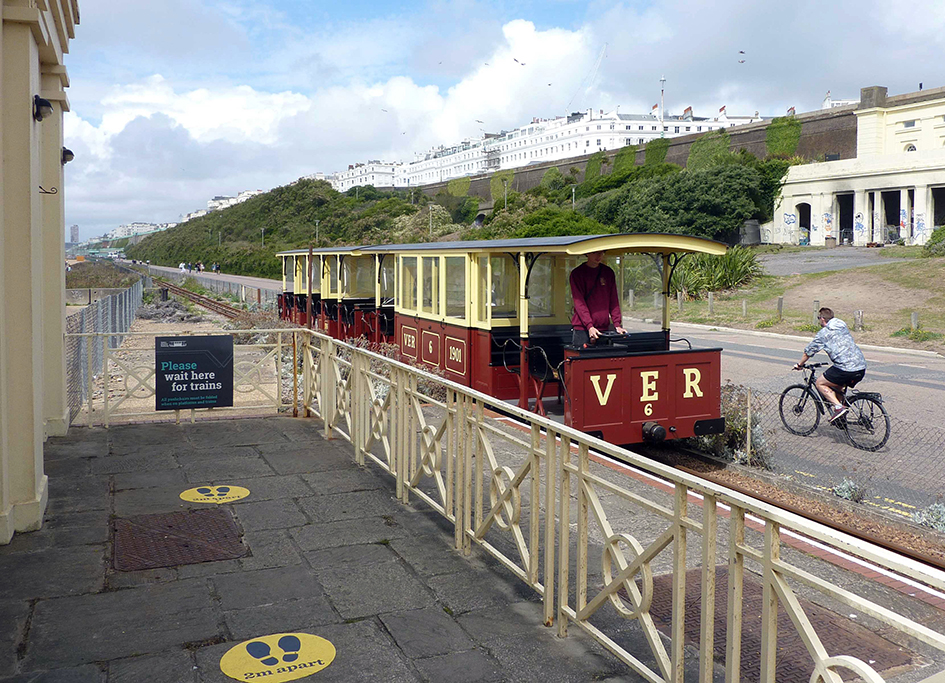 For over 60 years, I have been an advocate for the preservation of the rich history of the UK’s tramways, but I’ve never seen anything like the damage inflicted on heritage operations by COVID-19.

The enduring popularity of the nation’s heritage tramways has been a joy for both enthusiasts and the general public alike for decades, but the current coronavirus pandemic poses unprecedented challenges which threaten their successful development and, in some cases, their very survival. Marshalling support and finding the funding to secure their future has never been more vital.

The key message that we must get across to the public is that operators, until the most recent lockdown restrictions, have been doing all they can to remain open while introducing measures to stay COVID-safe.

However, with the more stringent restrictions introduced this autumn, many were forced to end their season earlier than planned or cancel festive activities that would usually provide a welcome boost to winter finances. As a result, calls to national and local government, and to all other potential funding sources, for support will become ever-more urgent if these great national assets are to survive and thrive again.

Hardest hit of all may be the Wirral Transport Museum and Heritage Tramway in Birkenhead, which is owned by the local council. Forced to close when the area became subject to Tier 3 restrictions on 14 October, there is as yet no guarantee it will re-open despite restrictions in the region being relaxed on 2 December.

It estimates that at least 125 working parties have also been lost, equal to about 2500 man-hours. Work on projects such as restoration of the Warrington tram has stopped. Outside contractors working on planned truck regauging have managed to keep going, but even here delivery will probably be delayed by a year.

The council continues to pay all service bills, heating, water, electricity, security, rates, water testing and insurances. But future prospects look somewhat daunting. Will the council regard the museum’s re-opening as a priority? Even then there may be problems retaining or re-motivating volunteers.

At the Beamish Museum Living Museum of the North, a potential GBP1m (EUR1.12m) deficit was forecast until defensive measures were put in place and alternative funding sources, including the Job Retention Scheme (JRS), kicked in.

The closure of the museum and tramway during lockdown saw 430 staff members put on furlough, including all maintenance and operations personnel. There was a partial re-opening in July, but the latest restrictions have cast doubt on any plans to start opening at weekends in December.

Finances, visitor numbers and job security have all suffered. No maintenance work has been carried out and all restoration tasks have been deferred. Current rough estimates are that the overall workshop programme may have been set back by three to five years due to the closure, and lost revenue will undoubtedly impact on future budgets.

Outgoings still amounted to GBP100 000 (EUR112 000) per month for insurance, wages, pension and National Insurance contributions (for those furloughed), as well as utilities and settling outstanding invoices. The jobs of 59 staff are said to be at risk and consultation on possible redundancies is ongoing.

But Beamish has shown a way forward in finding funding, with an Arts Council England grant of GBP425 000 (EUR477 000) already received and the possibility of a further funding application to come. CBILS (Coronavirus Business Interruption Loan Scheme) has been applied for, with and GBP750 000 (EUR842 000) has been allocated from Durham County Council towards the Remaking Beamish project, now back in
play from November 2020 after being put on hold in March.

This combined support has reduced the forecast deficit for 2020-21 by 80%. Winter operation is planned, but the autumn has been quiet after a good August, so further spending restrictions have been set, including placing some staff back on furlough. At the end of the JRS, the museum is looking into the follow-up Job Support Scheme (JSS) for more help in retaining staff.

In July, the Seaton Tramway in East Devon saw only 37% of budgeted pre-COVID visitor numbers, although August and September were busier, reaching around 77% of the pre-COVID estimate. Reduced capacity was the tramway’s biggest problem, with vehicles being classed as ‘full’ based on one-metre-plus distancing; extra trams were pressed into operation to keep queue sizes down.

Other challenges included the supply of PPE and cleaning products, with prices sky-rocketing and availability massively reduced, although this has since improved.

Seaton Tramway has also welcomed GBP435 000 (EUR488 000) from the Government’s Culture Recovery Fund, and other grants and business rates relief. This has allowed it to carry on with capital projects, but it says it needs UKTram to put the message out that heritage attractions will re-open for business when restrictions allow, working under COVID-safe measures. Sadly, the popular Christmas ‘Polar Express’ has been cancelled, but the charity promises to make the 2021 version ‘the biggest and best yet.’

The National Tramway Museum (NTM) at Crich had been in operation for just a week before the first national lockdown in March 2020, so the museum lost three months’ worth of visitor revenue right at the start of the season, when cashflow is at its lowest.

After re-opening at the first permitted opportunity in July, post-lockdown numbers were better than expected, partly thanks to it being a primarily outdoor attraction and good weather. However, the revenue losses were just one of the many COVID-related problems to be tackled.

Tramcar restoration and other projects were delayed, and Crich – alongside many heritage tramways – had issues with maintenance and storage while staff were furloughed and volunteers stayed away to comply with restrictions. The museum has received emergency funding from the Heritage Lottery Fund and elsewhere, as well as benefiting from the furlough scheme. Tony Williams, NTM representative to the Heritage Tramways Committee, feels the industry has fought well against an invisible and fast-moving enemy.

The lengthy exclusion of staff and volunteers was a major problem for the Summerlee Electric Tramway in North Lanarkshire, part of the Summerlee Museum of Scottish Industrial Life at Coatbridge.

Closure meant the loss of 120 000-150 000 visitors, and lockdown meant it was almost six months before any attention could be given to the trams and tramway. Once access to the site was permitted, the trams and infrastructure needed weeks of work to bring them back into operation. Risk assessments and social distancing still limit the number of staff and volunteers working on maintenance, repairs, servicing and cleaning of trams and track.

The museum’s tramway would normally have been carrying up to 400 passengers a day on summer weekends, but is now restricted to just six paying passengers per journey, with ten journeys per day when open.

Grant funding for the museum has benefited the tramway, as well as tram drivers and support staff benefiting from furlough. One of the main challenges will be in restoring visitor numbers once restrictions are removed and for the tramway to attract funders for the various small schemes of development and improvements abandoned as a result of the pandemic.

As for Blackpool Transport’s Heritage Tours, all the lights were extinguished on the vintage fleet from November until 3 December, losing so much of the Illuminations traffic which the resort depends upon to extend the season.

Even before the pandemic, finding funding for preservation projects was seldom a simple task, but heritage tramways up and down the UK have been rising to the challenges posed by COVID and finding ways to resume operation and restore some of their lost income through grants, loans and local authority support.

Adapting to a post-COVID world is a huge challenge, which heritage tramways are meeting now in a determined, resourceful and comprehensive manner.

However, the evidence of the need for further support for the heritage sector is undeniable. What we have to do now is to make sure that the powers-that-be are aware of it, so that heritage tramways can continue to serve the public for many more generations to come.