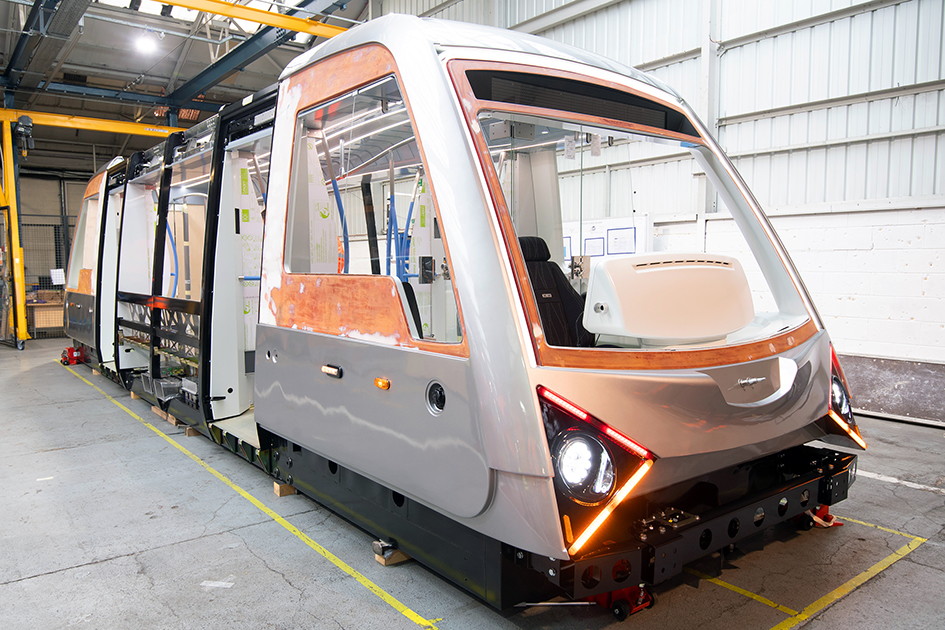 The first prototype of a Very Light Rail (VLR) ‘shuttle’ for the UK city of Coventry was revealed in late November, with testing expected to begin in February 2021. The vehicle will be trialled on a 2km (1.2-mile) line in Dudley, running partly in a disused tunnel between Cinder Bank and Castle Gate. Tracklaying on the test route is underway.

Funding of GBP14.66m (EUR16.2m) to develop an autonomous, battery-powered rail system has come from the West Midlands Combined Authority devolution deal and the Coventry and Warwickshire Local Enterprise Partnership Growth Fund. Due to the light weight of the new shuttles, it is intended that tracklaying will avoid the need to undertake utility diversion.

The vehicle is being assembled at NP Aerospace in Coventry, having been developed by the Warwick Manufacturing Group (WMG) and TDI (Transport Design International). WMG’s James Meredith described the project as “an excellent showcase for UK engineering and manufacturing with over 70% UK content. We look forward to testing the vehicle in 2021 alongside the low-cost trackform we are developing in parallel.”

A GBP24m (EUR26.6m) VLR National Innovation Centre, being built adjacent to the test track in Dudley, is expected to be finished in February 2022.

The first VLR route is expected to be built in Coventry itself, and integrated into the West Midlands transport system.

…and Revolution VLR breaks cover too

In related news, a prototype lightweight Revolution railcar – from many of the same project partners as the VLR shuttle – was delivered to the UK’s Long Marston testing and validation centre in late November.

Revolution is an 18m double-ended high-floor vehicle that combines rail and automotive technology into a concept designed for low-traffic routes or closed or under-utilised branch lines where conversion to full LRT standards is not cost-effective. It is an evolution of the ULR Express, built by Transport Design International (TDI) and Severn Lamb and supplied to the Turkish city of Konya in 2015.

In the coming months, final assembly and performance testing of the prototype will be completed ahead of demonstration runs planned for later in 2021.