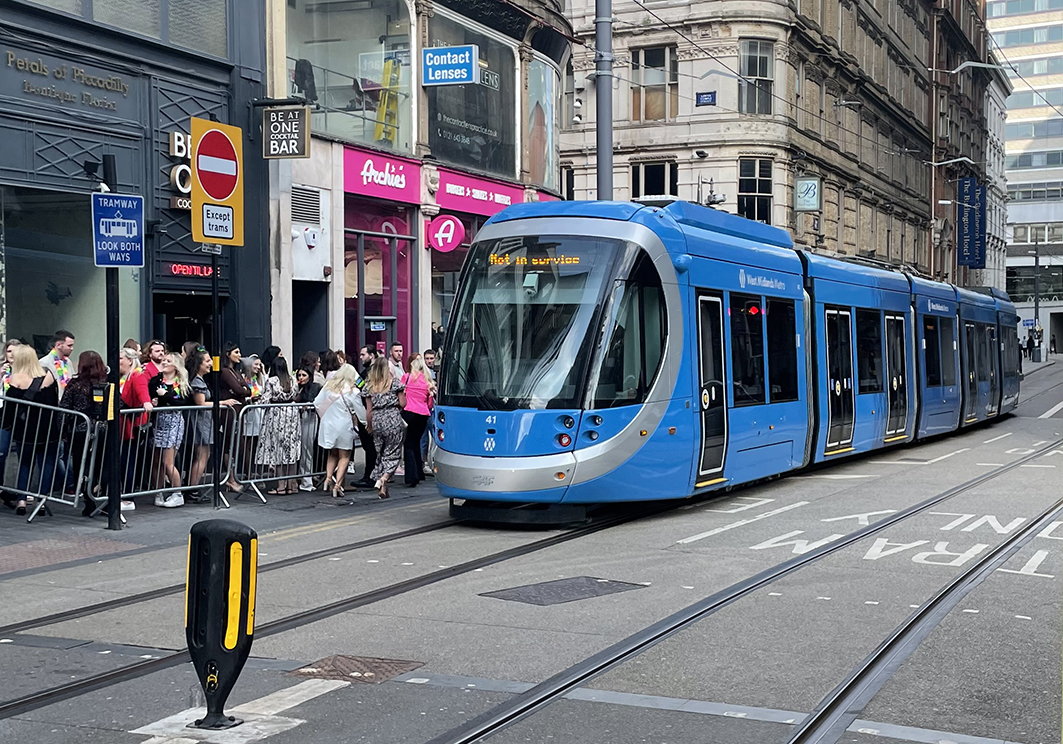 West Midlands Metro 41 – one of the latest batch of Urbos 100 vehicles, delivered in June 2021 – on test in central Birmingham in late April. TAUT

Services on the West Midlands Metro (UK) are to restart on 9 June, with the first trams running from 04.28 on the section between Wolverhampton St George’s and Birmingham Bull Street.

Tram operation has been suspended since 19 March, following the discovery of bodywork cracks in the CAF Urbos 3 fleet. Repairs have included replacement of vehicle panels at the system’s Wednesbury depot, as well as through outsourcing to the nearby Wolverton Works, in conjunction with manufacturer CAF. It is understood that six vehicles are to go to Wolverton.

In a statement on 8 June, operator Midland Metro Limited (MML) said that “the number of repaired trams, along with the new trams which have successfully completed their testing and commissioning, means that we are able to deliver a consistent service. Initially trams will run every 12-15 minutes throughout the day.”

It had previously been hoped that trams would begin running in late May, and to bring them back into operation as quickly as possible some will temporarily run without the blue vinyl branding around the doors.

In an earlier announcement, an MML spokesperson said that the operator “remains very confident” that a full service will be in operation in good time ahead of this summer’s Commonwealth Games which are due to start on 27 July. The Commonwealth Games, held every four years, are scheduled to last for two weeks.

The latest MML statement added that “we continue to work closely with the manufacturer to accelerate the repair programme and, as more trams become available, we will review the service that we are able to provide.

“We are sorry for the inconvenience that our customers have experienced during this time and thank them for their continued patience as we return a robust service across the entire network.”