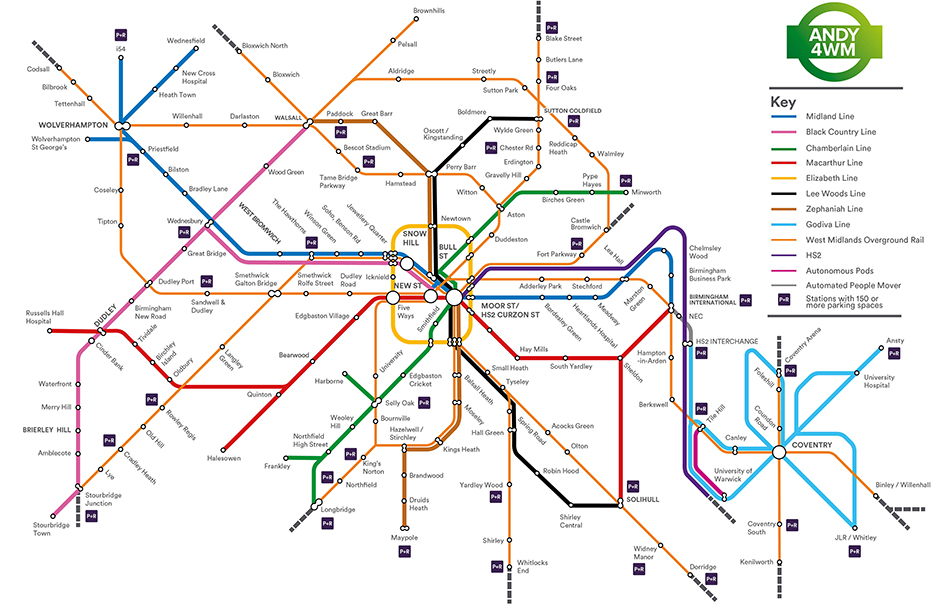 Could this be the West Midlands transport map in 20 years’ time? Mayor Street’s proposal builds on the existing and planned network, and incorporates ideas dating back to the ‘5Ws’ plans of 1989 that evisaged a 200km (125-mile)network by 2000. It includes new elements such as the Lee Woods line and Elizabeth line city circle. West Midlands Metro currently runs fromWolverhampton St George’s to Birmingham city centre over much of what is marked as the Midland line. Map courtesy of Andy 4WM

Ahead of the May 2020 UK City Region Mayoral elections, on 4 February West Midlands incumbent Andy Street unveiled his 20-year ‘Tube-style’ vision for the region at Walsall’s Aldridge Transport Museum.

The GBP15bn (EUR17.7bn) plan calls for 240km (150 miles) of new rail routes by 2040, including eight new metro lines – with elements of subway running using ‘cut and cover’ construction – and an additional 380 stops. With an estimated cost of GBP750m/year (EUR884m/year) for 20 years, finance would come from a combination of additional central Government funding, contributions from developers and borrowing against future Metro revenues, Mr Street said.

The proposals include naming Metro lines after prominent local figures and expansion of the programme that is already set to triple the network over the next decade. The plans will offer new connections to rail stations across the region as well as existing Ultra Light Rail services in Stourbridge.

As many as 30 new park-and-ride sites are planned, as well as new stations in Birmingham’s Balsall Heath and Dudley Road, alongside four new stations in Coventry and incorporating existing plans for a ‘clover leaf’ Very Light Rail network and new autonomous pod routes. Designs for the re-opening of the Walsall – Wolverhampton rail line have already been agreed and have entered the planning stage.

Mr Street said: “For too long we have been left behind London and Manchester, and other cities around the world. We are a world-class city region and deserve a world-class Metro and rail network.”

Elements of the Metro programme are already underway as January saw the extension to Birmingham Eastside granted Transport and Works Act approval. Construction is to begin within the next five years, extending services from Bull Street to the proposed new High Speed 2 station at Curzon Street and beyond to Digbeth. This GBP137m (EUR161.5m) project involves extending the tramway with 1.7km (1.1 miles) of double-track and four new stops as well as a bus interchange next to the Clayton Hotel north of Moor Street station.

Work has also begun on the Brierley Hill extension; this 11km (seven-mile) route would form part of the proposed Black Country line and open in 2023.

Despite the main infrastructure works being largely complete on the short extension to Wolverhampton station, delays associated with the opening of the new Wolverhampton heavy rail station mean that Metro service is unlikely to start before 2021.

A new Regional Transport Co-ordination Centre providing a single hub for West Midlands transport authorities and agencies, emergency services and bus, rail and tram operators to manage the network during major events and incidents was officially opened by Secretary of State for Transport Grant Shapps on 17 January. The facility is said to be the first in the UK.