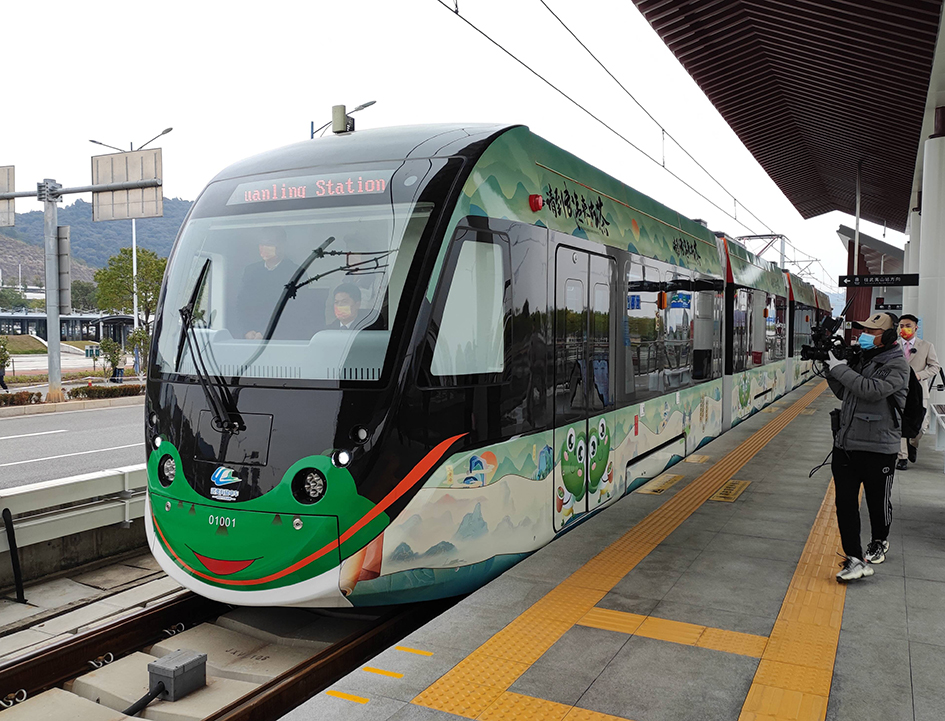 The 31 December saw the inauguration of a new tramway in China, one that is unique in being the country’s first fully-segregated modern tramline.

With 9.8km (six miles) on elevated alignments and a maximum speed of 70km/h (43.5 miles), end-to-end journey times are around 35 minutes. The route passes the Minyue King City Ruins, Hulushan Ruins and other scenic tourist locations in Wuyishan National Park.

Developed by CRRC Tangshan, this is the first PPP project undertaken by the CRRC subsidiary based in Hebei province and covers project financing, construction, operation, renewal and maintenance. The scenery of the Wuyi mountains and green waters are reflected in the cars’ design and liveries; the 12 100% low-floor cars built by CRRC Tangshan have aluminium alloy bodyshells and can carry 394 passengers. The interiors feature an automatic light-sensing function, which adjusts the luminescence according to the light entering the car’s windows.

Operating hours are 07.00-20.00, with fares from CNY5 (EUR0.70) payable using cash at stop-mounted ticket machines or via smartphone.

Construction on the CNY2.76bn (EUR381m) project began in December 2015 and civil works were completed by April 2020 to allow tracklaying. This is the first of three planned stages for a total 68km (42-mile) route, with preliminary works
on the second line (17km/10.5 miles and eight additional stops) already underway.