Zaragoza: A test bench for the future 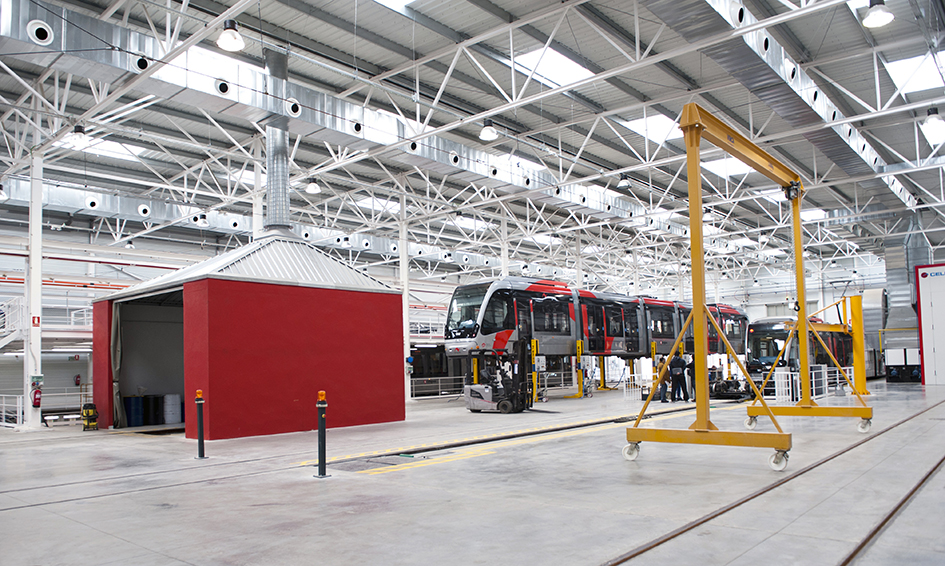 Inside the Valdespartera depot, showing the immaculate environment in which Zaragoza’s tram fleet is maintained.

Since the inauguration of the full length of its first tramline in March 2013, Tranvía Zaragoza has become one of Europe’s great tramway success stories. Now carrying more than 100 000 passengers/day – in a city of
700 000 residents – it is the tramline with the highest demand in Spain.

The system is also one of the most innovative public transport developments in the country in recent years, featuring the longest catenary-free section of any tramway in Spain, covering two kilometres (1.24 miles)
in the city centre. The tramway also makes full use of a global dynamic priority system that uses live data feeds to anticipate trams at given points on the line to set priorities accordingly. This allows for high commercial speeds of 19.5km/h (12mph) through an historic city centre that also features narrow streets and has 13 light controlled junctions per kilometre. The operator identifies an 8% energy saving due to trams running under this system.

Zaragoza’s tram fleet of 21 bi-directional 32.3m Urbos 100 five-section vehicles were supplied by CAF from its manufacturing facility in the north-eastern outskirts of the city. However, it is the intention that the trams will never return to the factory in which they were built, with CAF providing all maintenance and preparation services inside two facilities of Tranvía Zaragoza which have been fitted with all the latest technologies.

Two depots for one line?

The city’s tramline opened in stages between April 2011 and March 2013 and runs from Parque Goya in the north through the historic city centre to Valdespartera in the south-west. Given its 12.8km (eight-mile) length, it may seem extravagant that operations are undertaken from two depots – located at each end of the line – but when you look at the intensive service pattern in Zaragoza it all makes sense.

From the first studies of tram reintroduction in the early 2000s, the city council always intended to use the new tramway as the primary mode of transport and also to free up street space for the city’s main annual celebration: Fiestas del Pilar.

During ten days each October, this extravaganza sees the streets in the city’s downtown area crowded with hundreds of thousands of people, with several streets closed to road traffic. Fiestas del Pilar was declared a ‘Fiesta of International Tourist Interest’ in 1980 for its cultural and historical significance, and is the main celebration for the city. It is thus a key driver of the local economy with parades, musical and cultural events held across the city.

At some times during the festival period, the best way to offer an effective tram service is to separate line 1 into two sections: north – centre and south – centre. Tramway services are also offered 24 hours a day during the festival. This is only possible by having a depot at each end of the line, each with its own dedicated fleet. Away from the celebrations, this configuration gives further operational flexibility and also makes it easier to reorganise the line in the event of an incident. Additionally, this setup helps to future-proof the system by allowing for fleet expansion to serve future lines.

The smaller depot, featuring a 2969m2 main building located on a 16 676m2 site with seven tracks, is located at the extreme north of the line at Parque Goya, near Juslibol tramstop. Less hemmed in by surrounding development, this site is normally used for light maintenance and additional stabling space, and has the easiest opportunities for expansion.

The main facility is located in the south at Valdespartera, accessed via a short dedicated spur from the main running line. It features 5035m2 of buildings on a 17 661m2 site and centralises most of the maintenance works in a safe and intermodal infrastructure custom-built for the needs of line 1. This site houses the system’s main operations and control centre, and is also the headquarters of Tranvía Zaragoza.

The workshop has five maintenance tracks, with a further six stabling tracks (each track has a catenary supply), and has capacity to accommodate the entire fleet as and when required. Regular maintenance as well as more complex and intensive repair works, which includes a 15m-long paint shop, are carried out at this facility.

The depot has been arranged in such a way as to separate each process in different spaces. One of the workshop’s tracks includes 12 lifting columns to allow for bogie maintenance and the adjacent area includes two pits and gantry systems that allow for easy access to both the roof-mounted equipment and underside of the trams, protected with an interlock system to avoid electrocution risks. In practice, in order to access a vehicle’s roof the operator is required to open a door with a key, which can only be done once the catenary is deactivated.

The wheel reprofiling system evaluates the health of a vehicle’s wheels on the track itself, with a system composed of different cameras that sends data to the cloud. This digital tool makes it possible to also anticipate wear and optimise the wheel’s life. The reprofiling operation is performed by a laser system developed by Danobat, meaning it is not necessary to disassemble any bearing element.

The workshop includes a separate area dedicated to bogies, and a closed cabin is used to fully wash the bogies before any inspection and maintenance is undertaken. They are then disassembled from the tram and loaded into a small trolley in order to place them inside the cabin; there, they are cleaned using both compressed air and water systems. After this they are raised by a system of three bridge cranes onto a metal table for maintenance.

The city takes pride in its tramway and the undertaking believes that the cleaner its trams are, the less vandalism they will suffer. To achieve this, the trams are washed thoroughly every two days in an automatic washing facility that achieves an 80% water recovery and recycling rate, the loss largely being due to evaporation associated with the city’s hot climate.

The next process involves transfer to an adjacent shed that features the sandbox and a pit for underfloor maintenance, before the trams are ready to leave the depot.

Prepared for all weathers

The depot has an advanced heating and air conditioning system to accommodate the harsh weather conditions in Zaragoza, some of the most extreme in Spain. During the winter months temperatures can drop below 0°C, while in the summer they often surpass 40°C – it is said that the city has ‘nine months of winter and three months of hell’!

Zaragoza is also a very windy city. Located in the middle of the Ebro Valley, which connects low-pressure areas of the Cantabrian Sea with high-pressure areas of the Mediterranean, in the past winds caused continuous failures in the automatic system that opens the depot’s entrance gates. To remedy this issue, Tranvía Zaragoza’s engineers developed an innovative flap system that is activated before the gates are opened to reduce the wind pushing them
and causing damage.

Sustainability at its core

With the opening of its first tramline, Zaragoza inaugurated a sustainable means of transport that offered both residents and visitors to the city an efficient alternative to private car travel. This challenge has been met and today there is 15% less traffic in the whole city, and up to 30% in the city centre.

Sustainability is an integral company consideration that is evident inside the workshop. All lighting in common areas and corridors is activated by movement, and the temperature is established to be comfortable, while at the same time minimising energy consumption. The cars used by the system’s maintenance crew are electric and inside the depot compound there are three parking spaces with electric chargers.

Shift2Rail: Planning for the future

Tranvía Zaragoza has joined Shift2Rail, a European project to deliver – through railway research and innovation – the capabilities to bring about the most sustainable, cost-efficient, high-performing, time-driven, digital and competitive customer-centred transport mode.

The European Commission is working towards the creation of a Single European Railway Area (SERA), and has promoted a modal shift from road to rail in order to achieve a more competitive and resource-efficient transport system.

However, rail’s share in the European freight and passenger transport sector is still not high enough. EU research and innovation therefore helps rail to play a new, broader role in global transport markets, by both addressing pressing short-term challenges that drain rail business operations, and also by helping the sector to gain a stronger market position.

In this sense, Tranvía Zaragoza collaborates as a benchmark with its maintenance facilities, measuring many energy parameters in the workshop’s everyday life, such as lighting, heating and air conditioning, catenary consumption etc. The objective of this research is to determine the most effective measures to reduce energy consumption in the railway industry.