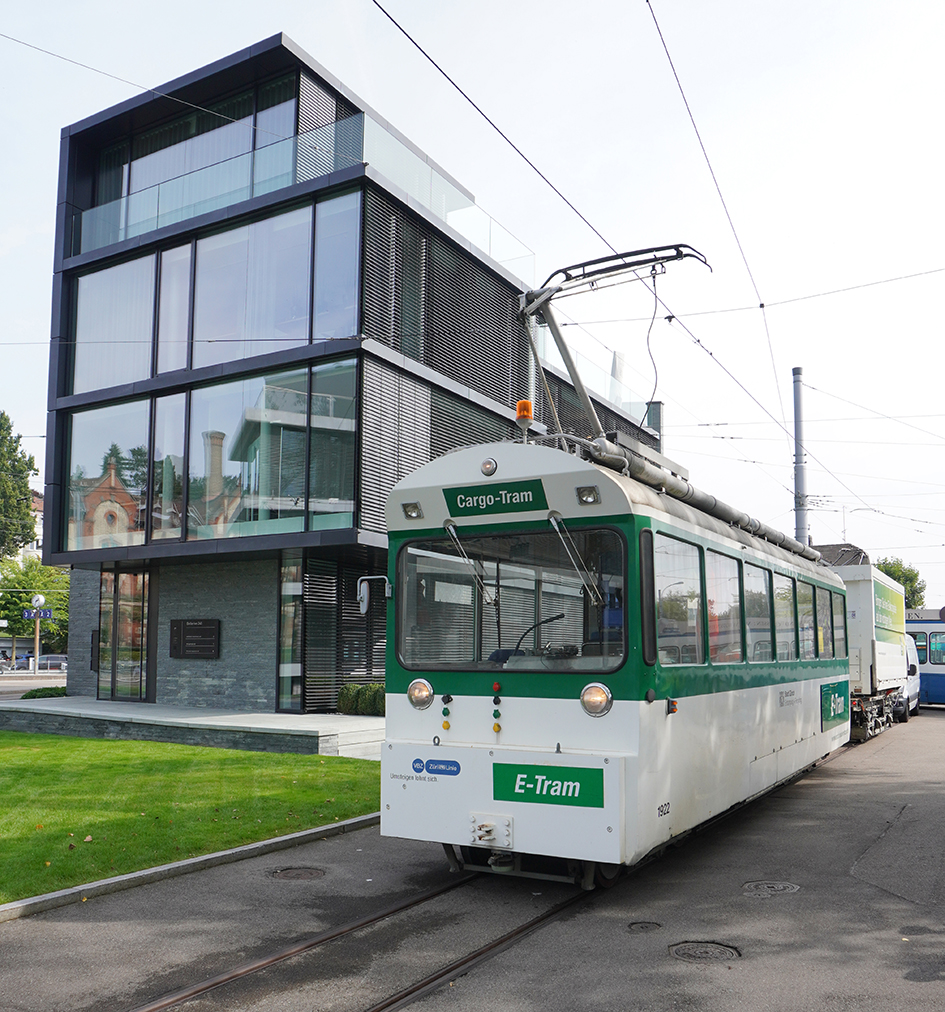 Operating as an E-Tram for the afternoon, car 1922 has just reversed onto the siding at the Bahnhof Tiefenbrunnen terminus. The turning loop for regular services surrounds the siding and the pictured building. This is a fine example of how the Cargo-Tram/E-Tram operation is able to function efficiently without getting in the way of regular passenger trams. Image courtesy of Andrew Thompson.

Since 2003 a unique tram enterprise has operated in the Swiss city of Zürich. It provides waste collection and recycling services to the roughly 48% of city households without a car or the facility to get large or bulky items to the main disposal centre at Hagenholz. Due to the popularity of this public service, the operation’s scope has been expanded to include the collection of old or broken electronics. Correspondingly, this facility has been branded as E-Tram.

Both the E-Tram and Cargo-Tram run all year-round Monday-Saturday, serving 11 pick-up sites around the city on a rotating basis. Drop-off times are 15.00-19.00 on weekdays and 07.30-14.00 on Saturdays. Purely for the location at Strassenverkehrsamt, a substitute lorry has to be used every 14 days on Fridays, as there is no suitable siding to park rolling stock without blocking regular tram traffic on line 13.

The city’s terms of use for both the Cargo Tram and E-Tram state that only objects weighing up to 40kg or with a maximum length of 2.5m may be brought for disposal on the waste container hauled by the tram. Naturally, some items are banned, such as sand, gravel, liquids or hazardous materials. Using a car to deliver bulky items to the pick-up site of the Cargo-Tram or E-Tram is not permitted either. Hand-carried sofas are accepted for disposal, if they are a maximum of two metres in length.

The operation is staffed by a team of four; in addition to the tram driver there are two recycling specialists and a guard to manage traffic flow. The actual tramcar used is a novelty in its own right, as it is a vintage vehicle dating from 1940. Originally built as Be 4/4 car 1352, it was part of the iconic Standardwagen series. These semi-streamlined trams were the Swiss adaptation of the US PCC concept, although technically different enough to not require a production license.

From 1940 to 1973, Swiss manufacturers delivered a total of 261 Standard motor cars and 216 matching trailers (in various sub-series) to undertakings in Basel, Bern, Genève, Luzern, Neuchâtel and Zürich. In Zürich these simple yet sturdy non-articulated trams were withdrawn between 1987 and 1994, although the nine vehicles (1351-59) had already been converted to snowploughs between 1980 and 1982. This also led to their reclassification as type Xe 4/4 works vehicles. As part of this modernisation, the angular front-end with enclosed cab and one row of side windows were cut off, shortening the vehicle and allowing the installation of a much larger flat windscreen panel for better operation of the newly-fitted snowplough and its hydraulic lifting device.

Of those nine adapted Standard cars, four (1922-25) remain in Zürich today, with 1922 dedicated for Cargo-Tram/E-Tram operation. When the cargo service began in 2003, the tram had a white and blue livery, but in 2013 this was changed to white and green to reflect the updated corporate identity of Zürich’s municipal waste management company ERZ, which runs the Cargo-Tram in co-operation with public transport operator VBZ, another city subsidiary.

Inside, car 1922 is fitted with a practical work area and various small waste processing tools, allowing the recycling specialists to begin dismantling awkwardly-shaped items on site. The Cargo-Tram typically hauls one or two flat-bed freight wagons which can carry different types of swap bodies, such as containers or large recycling bins. The stock is typically based at the Werdhölzli depot, from where all collected waste is transferred the short distance to Hagenholz by lorry. Due to current track renewal work on the Werdhölzli branch, the Cargo-Tram has most recently been stabled at Hardturm depot.

On average, the service collects around 425 tons of bulk waste a year, roughly 3.2% of all such materials processed in Zürich. Often long lines of neighbourhood residents can be found at the designated site at 15.00 and the pick-up locations get particularly busy after the normal office hours from 17.00.

A concept with mixed results 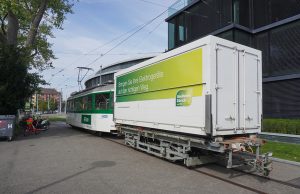 This rear view of the Cargo-Tram/E-Tram consist shows the type X2 (two-axle) flat-bed freight wagon with interchangeable container for waste collection. While the front part of car 1922 has been significantly altered and modernised with the shortened car body and flat windscreen panel, the angular rear is original and a hallmark of 1940s industrial design, as applied to the entire series of Swiss Standardwagen. Image courtesy of Andrew Thompson.

The success of the Zürich Cargo-Tram is largely due to it meeting a public need in a city where residents can comfortably live without a car. This is in contrast to other European cities, where alternate ‘freight by tram’ concepts have failed to gain traction.

In Wien (Vienna), a ‘GüterBim’ was launched in 2005. Mainly designed to use the tram network for delivery logistics and to supply goods to supermarkets, the GüterBim proved impractical and was therefore never able to attract enough commercial customers. The trial was cancelled two years later.

In 2009, the short-lived ‘CityCargo’ venture in Amsterdam (Netherlands) suffered a similar fate, while in Saint-Étienne (France) the ‘TramFret’ logistics service had the backing of a national supermarket chain for a short period in 2017. This concept has not been pursued, however.

Aside from Zürich, the only other successful 21st Century freight tram service in Europe was Volkswagen’s ‘CarGo’ which operated in Dresden from 2001 to 2020. This was used for just-in-time logistics to transfer components between the city’s Friedrichstadt freight yard and the Gläserne Manufaktur (Transparent Factory) facility at Strassburgerplatz using a small fleet of bespoke five-section trams.

The proposition is being investigated elsewhere in Germany. In March 2021, a collaborative effort between the Karlsruhe Institute of Technology, operator Albtal-Verkehrs-Gesellschaft (AVG), the FZI Research Centre for Information Technology and industry partners began developing a technical and logistical concept for a freight service based upon the Karlsruhe tram-train network. 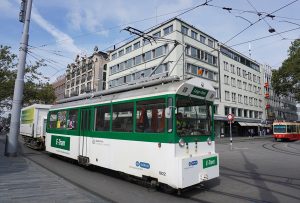 Bound for Bahnhof Tiefenbrunnen for an afternoon pick-up, car 1922 is seen with one trailer on the busy three-track section in the city centre between Bellevue and Opernhaus. In the background is a Forchbahn (FB) LRV in traditional orange and cream livery, sitting idle at the Bahnhof Stadelhofen city centre terminus. Image courtesy of Andrew Thompson.

The ‘LogIKTram’ programme is part of the wider regioKArgo initiative, investigating the potential for new forms of cross-carrier logistics traffic. The three-year pilot has funding of EUR2.75m from Germany’s Ministry for Economic Affairs and Energy.

In Zürich, the cargo tramway has proven successful as it represents a high-quality public service that covers a niche for which there is significant demand. Thanks to the clean and green cargo tram operation, countless car and lorry journeys are eliminated, helping contribute to congestion and pollution reduction in the city.